You Are Cordially Invited... 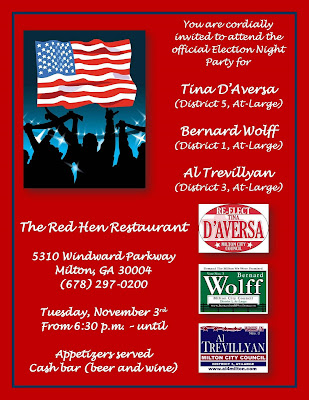 Big place for 3 canidates? I guess it is ok for a defeat party.

Check your spelling oh perfect one!

Your continuous anonymous chicken$h1t false comments are just digging a deeper hole. If it was true, you'd put your name on it and the press would be running it.

The press did run it. In California and Tennessee. And by the way, the DA thought is was newsworthy enough to attach an $8 million fine to Karen's little dirty deed.

Hey Laura, thanks for the post. And, since you are new in town, welcome and good luck unpacking.

One more thing: why don't you consider keeping your liberal, dishonest, self-enriching politics to yourself until you've been here, sayyyy, five or ten years?

Time will tell. Karen why don't you go to a spa instead of blogging. You need it after all your hard work behind the scenes running Longoria's slime campaign against Tina. You are the puppet master behind this one and Milton knows it. You have the relationship with O'Brien who filed the ridiculous ethics charges so late in the game so Tina couldn't clear her name in time. You are ruthless and I hope out of all the people running you get your rear end outsted. Go enjoy a massage girlfriend for all your hard work at a nasty campaign.

Just because you are paranoid doesn't mean you aren't a moonbat.

I bet Lusk, Thurman and Longoria end up at the Ole Blind Dog, win or lose. That's a hard prediction, after all Ron needs some more cash off this election. His restaurant is the big winner. Go Ron you Capitalist!! Better get it while you can before Obama takes you down with all the other rich people in this country to spread the wealth around.

What's this??? Beer and wine will be served? SHOCKING.

5:59AM Try a new line, by the way have you ever seen chicken$hit or actually witnessed a chicken $hitting? probably not.

3:35 we see how far your lies got you. Just wait for the lawsuit, now!