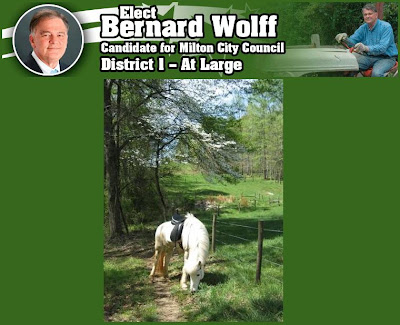 Our first home was in a small community outside of Atlanta. It consisted of quaint buildings with a cozy restaurant, antique and specialty shops in historic buildings and shopping and schools within easy driving distance. The neighborhoods were tastefully designed, with scenic roads winding through wooded areas. The homes reflected a middle class, family-oriented community.

As more people moved into the neighborhood, rumors began to circulate about developers moving in. This led to community meetings organized by a pleasant lady who identified herself as a "concerned resident." Initial meetings discussed the need to resist losing the quaint core of the community to high density development. This evolved into meetings about proposed projects. Strangely, the pleasant lady organizer gradually shifted positions to one of "inevitability" of development and the need to "compromise" to minimize the negative impact.
Two years later, the community was littered with high density apartments and condominiums. Traffic clogged the village and still does. We learned that the "pleasant lady" who represented the community was a "Trojan Horse" secretly working for developers anxious to bypass community standards and preferences.
After the damage was done, the residents rose up again and pressured the county and developers to build a shopping area with strict design guidelines that yielded a tasteful dining and shopping area that reflected the former village appearance. Unfortunately,the problems of aberrant high density development remain.
Milton residents face a similar challenge now: Will we preserve and improve Milton in the manner we were promised? I believe we can if the current majority on the Milton City Council is relegated to a minority on November 3rd. If elected, I will:

Attract desirable businesses to fill the 1,000,000 square feet of empty commercial space in Milton, rather than building additional commercial projects to "generate tax revenue" as promoted by my opponent. Empty commercial space consumes rather than generates City revenue. The new businesses will generate tax income IF the businesses offer products and services that Milton citizens actually want. The current majority, including my opponent, could not care less about what we want. Instead, their focus is on revenue generation for the City regardless of negative impact on our citizens.

Expand Parks and Recreation Areas: While the economy has reduced tax revenue, it has a positive side of reducing demand for property. Landowners are more amenable to selling their properties at an affordable price and under innovative terms of payment that are affordable for Milton. New properties so acquired offer parks and recreation areas for the community to enjoy. New recreation areas not only generate income to the city, they also attract visitors who will patronize events and spend money in the properly developed commercial areas. They provide Milton citizens with sports programs that are unavailable now.

Ensure that Milton City Government is small, efficient, and responsive to its citizens. Tight "line item" budgets with accountability, possibly outsourcing services under strict contractual guidelines (missing up until now), and limiting services to those appropriate for rural areas, and the urban Highway 9 area, respectively.

I am not alone in my conviction that Milton can thrive as promised. A recent state-commissioned report stated that the Milton reflected in existing Community Plans is entirely viable if services are well provided but limited to what is actually needed. These include Police, Fire, 911, road maintenance and parks and recreation areas.

Finally, we need to recognize who is and who is not promoting the Milton we were promised. My opponent's contributors and supporters reveal her close association with the development community. This qualifies her as a "Trojan Horse" who promises a rural Milton paid for by high density development by consistently voting for zoning variances and sewer extensions.

We want development strictly controlled by community plans and ordinances to reflect the Citizens' wishes, rather than destructive, uncontrolled development such as most of us have witnessed.

Demand the Milton We Were Promised

Courtesy Paid for by the Bernard W. Wolff Election Committee

If he is trying to sell his family's land to the city and add development rights then who is the real owner of the "Trojan Horse"?