Preserving Milton's Past, Securing Its Future. 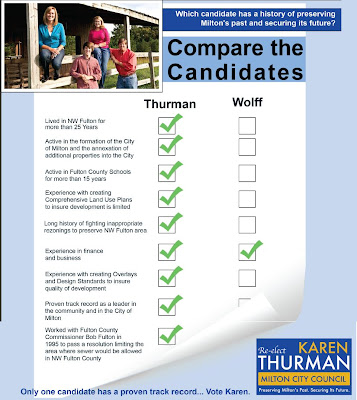 Quick question: Was the horse not available for the photo shoot?

Not sure but at least these people agreed to be in the photo unlike others.

Tina wouldn't give up the horse and it looks like she's trying to talk Joe's dog out of running around the yard.

Karen has worked very hard for many years to keep Milton rural and low density. She is not only a treasure to our community, she is highly talented and experienced and worthy of reelection.

Amen. I agree. Karen is an asset to this community and it's future.

I would have never voted for her before , but now understand why she should remain on Council, so this year she got my vote.

Definitely an asset. She left off a few other key differences between herself and Wolff.
- Investor in company to rip-off soldiers.
- Lead financial justification committee for Milton, that turned out to be completely wrong.
- Leader in Crabapple Master Plan that resulted in an abomination, but that she blamed on Fulton.
- Created Sewer Extension motion for Milton.
- CPA Client focus is "Development and Construction Companies"
- Father is a significant Developer, and she and her husband have interest in family construction and development businesses.
- Received majority of funding from Developers.
- And it goes on.

She is definitely an asset but, unfortunately, its for the developers, not Milton.

Hopefully, her first 3 years improved her contacts enough to improve her CPA client list and gave the family some new connects.

Karen is an asset alright, just drop the "et" at the end.

Funny how the losers who hate the US, don't give a hoot about the troops and are freeloading here, are the biggest critics of a company that foreclosed some bad debts.
Incidentally, anyone in cyberspace ever invest in a company or candidate (John Edwards or Hillary, for you Julie Zidiots)that did some things that look bad?

The same flakes that apparently condone bribery, extortion and election fraud are comfortable supporting Tina, but are attacking Thurman for an arms-length investment in a company that got hammered for some screwups completely out of her control and awareness?

I wouldn't call violation of consumer protection laws and taking advantage of our military "screwups". Must be nice to be able to leave an investment of several million dollars "at arms length". If she doesn't keep careful watch over her own family money, she certainly can't be trusted with Milton's.

Vote for Karen and vote for sewer and for developers, check.