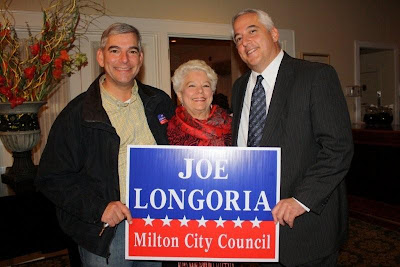 Hey, where is the horse?

No horse, no rural vision!

Is it a requirement to be pictured with a horse if you run for office in Milton?

There is a horse in the picture. It is on the right. You're just used to seeing a horse from the other end.

You are all COWARDS hiding behind your anonymity, making your snide comments. Why would any candidate want to represent spoiled rotten brats such as the posters on this site. My four-year old plays nicer than you adults.

Nice looking men and a proud and beautiful mother. How could anyone make such nasty remarks when these people represent what is good about our country -- freedom and our rights and priveleges as citizens. Remember, behind all these candidates are family and friends who love and support them. Stooping to such lows as to call them a horse's ass is only reflective on the author, not those pictured.

One rotten Joe on Council is enough.

Karen please get yourself to the spa, you must be so worn out from being the puppet master in the slime campaign you dragged Longoria into. Amazing how easy Longoria jumped into the arms of Karen Thurman to help him with his campaign. They didn't even know each other at all, but now they are the best of friends. All it took was one common denominator, Tina. Karen hates Tina because she hates Julie ZB, and anyone that is friends or an associate, or has ever spoken to JZB is considered an enemy by Karen, and Joe naturally wanted to run for Tina's seat because Crooked Creek wants their gates, so it was a natural match made in hell. Funny how in times like this they can pull together as a real family, so they can get what they want in Milton, and not what the people want.

We'll see how involved the people of Milton are by the voter turn out. If it's weak then they will get what they deserve, sewer expansion and wishes granted to all developers, if it's a strong turn out, then the area will be protected for now, until the next round of elections. Don't you get it people, this is going to be an on going issue in Milton, either we fight each and everytime to make sure the people getting elected represent the little guy, the real people in Milton, or we let the people associated with the developers, contractors, lawyers, and builders eventually win and take over the city. all it takes is for Milton to stop paying attention one election cycle, and this could be the one where the people lose if they dont go out and vote.

Does your mom know about your drinking problem Joe Clinton?

Tina will learn how powerful Julie is today. She will not be powerful in getting Tina re-elected but powerful when Tina goes down because she is associated with Julie.

Get ready! Your new council will have Milton looking like Gwinnett Place Mall. Longoria will be hiding behind his gate at CC and Karen Thurman hiding behind the money she made taking advantage of our men in uniform. Milton doesn't even have a "town" area. Don't guess it matters now!!!

fool me once - shame on you

fool me twice - shame on me

fool me three times? nope not this time - it's a blowout! and I mean blow - out

please take the last few remaining kool-aiders with you

large turnout - 30% larger than last time around and you still lose big!

so much for your predictions

JZB...you're next!
Happy days are here for Milton at last! I am so proud of our citizens. The people have spoken loud and clear.