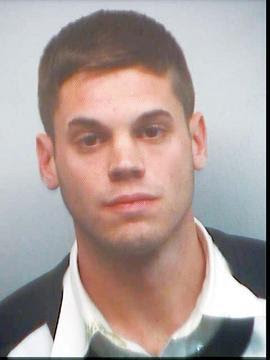 Courtesy Appen Newspapers
November 16, 2009 MILTON — Milton police arrested a 23-year-old man Nov. 1 who allegedly started a fight with another motorist for "no reason" and in the process was hit by a car, doused in the face with pepper spray by his own girlfriend and Tasered by Alpharetta police.
Police said the incident began at the intersection of Ga. 9 and Windward Parkway when Kaury B. Sickinger of Milton reportedly jumped out of his girlfriend's Honda CRV and began trying to goad another motorist into a fight. Sickinger then allegedly kicked and punched the man's mini van.
When Sickinger ran back to the car, the motorist called 911 began following them. He told police that while on Bethany Bend Road, Sickinger climbed out the sunroof and stood on top of the CRV at 40 mph taunting him.
Both parties pulled onto Old North Park Lane, according to the victim, and Sickinger again began beating the other man's car. The victim jumped out and pushed Sickinger to the ground, holding him down until he "began to apologize and agreed to pay for the damages."
Sickinger was just bluffing though, said the victim, because as soon as he got up, the fight was on again.
Here's where it gets really interesting.
"Sickinger's girlfriend then sprayed Sickinger with Mace, which caused him to get very angry," reported police. He then allegedly pulled out a knife "and told [the driver] that he better start running."
The chase was on, but didn't last long, according to police.
"While [the driver] was running for his life, Sickinger was so intoxicated that he ran into the passenger side rear quarter panel of a passing vehicle, which caused him to retreat back to [his girlfriend's] car," wrote investigators.
The pair then drove off. While the shaken driver was talking with a Milton police officer on Old North Park Lane, they apparently swung by again.
This time the Milton officer called Alpharetta police and told them to be on the lookout for the CRV. When they tried to pull it over, Sickinger allegedly ran out while the car was still moving. He was Tasered into submission.
But it doesn't end there.
While being questioned, police said Sickinger reportedly admitted to everything, save for having a knife.
"Sickinger acknowledged that he was very intoxicated and, for no reason, had tried to fight [the motorist]," wrote investigators. "He also acknowledged that he got on the roof of his girlfriend's car for no apparent reason."
On his way to jail, officers asked Sickinger to confirm he was in fact a Marine, a claim he made.
That apparently made him very upset, said police, and Sickinger began telling them he was also "on first offender status for bank robbery and attempted murder on a police officer."
He then began beating his head on the police car and allegedly told the officer "I'm going to kill you and anyone else I want."
Sickinger further drove home the point by saying, "I'll be out in no time," said Milton police.
"Then he explained how once he was out, he was going to 'walk up behind you and cap you in the back of the head.' He stated that he could do all of this due to his training from the Marine Corps," said one Milton officer.
Sickinger was charged with aggravated assault, obstruction, 2nd degree criminal damage to property and making terroristic threats. He remains in Fulton County Jail on a $51,000 bond.
Posted by Accessmilton Admin at Monday, November 16, 2009

They should just shoot people like this and be done with it.