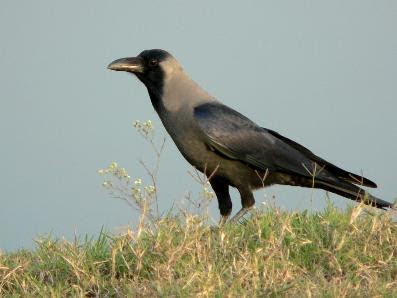 Crows are perhaps one of the most widely recognized birds in the United States. While some people view them favorably, others consider crows to be a nuisance. But whether liked or not, almost every one agrees that crows are adaptable, inquisitive and intelligent birds. In fact, crows have become the subject of many myths and legends.

Georgia is home to both the American Crow (Corvus brachyrhyncos,), and the Fish Crow (Corvus ossifragus). Crows belong to the family Corvidae, which also includes ravens, jays and magpies. In addition to crows, Common Ravens (Corvus corax) are the only other large solid black birds occurring in Georgia. Ravens are found in extreme northern Georgia and are somewhat easily distinguished from crows by being much larger in size, having wedge-shaped tails, a soaring flight pattern and a deep croaking call.

American crows occur throughout Georgia occupying a wide range of habitats including rural to urban and farmland to woodland. They are most abundant in areas with a mixture of open land that provides ground feeding; and scattered trees and woodlots that provide nesting and roosting sites. Adults have glossy black to purplish feathers with stout black bills and black feet. They are about 17 - 21 inches in length and range in weight from 12 ounces to a little over one pound.

Fish crows are very similar in appearance and biology to American crows. However, they primarily occur in the southern half of the state in association with large watercourses, reservoirs and coastal waterways. Fish crows are about 10 percent smaller in size than American crows and have plumage that is somewhat more iridescent in color, but these traits are difficult to distinguish in the field. The most easily distinguishable characteristic is the more nasal and often double call (ca or ca-ha) of fish crows as opposed to the somewhat deeper and often singular call (caw) of American crows. However, even this criterion is not 100 percent accurate as juvenile American crows can make very similar sounds and all crows have a great repertoire of vocalizations.

Due to the great similarity of American and fish crows, and the lack of detailed scientific knowledge regarding the biology of fish crows, the information provided in the remainder of this fact sheet will be combined for both species.

Crows are gregarious during the fall and winter, forming flocks of 20 to several hundred birds. During this time they may also congregate into communal roosts with numbers in the tens of thousands. At northern latitudes crows exhibit migratory behavior but are commonly year-long residents in Georgia.

Crows are best classified as opportunistic omnivores. They consume a wide variety of animal and vegetable foods including commercial agricultural crops, fruits, nuts, insects, small mammals, salamanders, lizards, fledgling birds, bird eggs, carrion and human garbage. As with many other aspects of their life history, they exhibit great ingenuity in feeding including dropping hard-shelled nuts and other foods from great heights to break the items into consumable amounts.

Crows begin nesting as early as late February and construct a new nest each year from sticks, twigs and other materials. Nests are often in the fork of a tree next to the trunk, 20 - 60 feet above the ground. Conifer trees are preferred nesting trees when available. Both sexes participate in nest construction and sub-adult birds may assist as helpers. The average clutch is 4 - 5 pale bluish green to olive green eggs that are typically splotched with browns and grays. The incubation period is about 18 days with the young fledging in 28 - 35 days. Both sexes assist in rearing the young and only one brood is raised per nesting season.

Like most birds, crows and their eggs are vulnerable to a variety of mortality factors. Predators include owls, hawks, eagles, rat snakes and a variety of mammals. Crows often respond to predators with a behavior referred to as "mobbing" where a flock will relentlessly chase a predator while calling (cawing) vociferously. In addition to predators, crows are also susceptible to a variety of diseases. One of the most recently noted is West Nile Virus, which was discovered in the U.S. in 1999 and is particularly virulent to crows and other members of the family Corvidae. It remains to be seen how this disease will impact crow populations in the Southeast.

Crows have a reputation as agricultural pests and predators on songbirds and various other wildlife species. In this regard humans have often attempted to control their numbers. However, crow populations have remained stable and even increased in many areas, which is a testament to their adaptability. At present in Georgia crows can be controlled by lethal means anytime they are causing damage to agricultural crops.

Crows are a migratory game species in Georgia and can be legally taken as specified in the state hunting regulations. They are typically hunted in a manner similar to waterfowl using mouth calls and decoys. They are a challenging and sporting game bird and also provide excellent table fare when properly prepared.

Thanks to http://georgiawildlife.dnr.state.ga.us
Posted by Accessmilton Admin at Friday, October 05, 2007

Will Roger Santi and Neal "RJ" O'Brien eat some crow if they are elected and some of their supporters want sewer or a re-zoning?