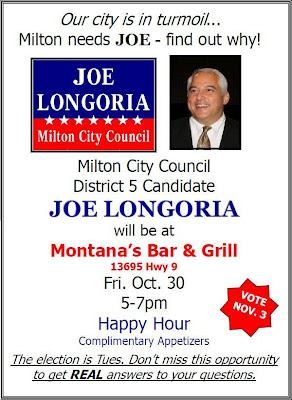 Man you don't know the half of it.....one of your running mates may be in deep dark chocolate.

Our city is not in turmoil. Longoria your neighborhood is in turmoil over their gates and wanting you to be their "council Person" so you and Karen Thurman can actually try and change Georgia State Law for the residents of your neighborhood. What a great reason to run for office. You don't represent me out here as an open road resident on acreage at all, you are clueless to what we all want, and it isn't the likes of Crooked Creek.

Is he buying the drinks....and the votes?

.
Karen Thurman - how did and "accomplished" CPA get involved in the Rome Finance situation. Obviously you saw a ridiculous rate of return and greed kicked in. You had to know these purchasers/senior citizens or soldiers were being ripped off and there would be no way it would last! Talk about taking advantage of the disadvantaged. It sounds like you "loaned" on an unsecured promissory note, expecting what???? 16% to 18% return? If you're an accomplished CPA and would do this, I don't want you making decisions on my Milton TAX DOLLARS. Oh and you being on the outside creditors committee only means you are there to make sure YOU and YOURS are paid back sooner rather than later.

see comments under "The Accuracy Of Accessmilton.com Polls."

Thurman will be after widows and orphans soon

Hey john Fredericks, how much is Karen paying you to keep the latest out of the Beacon?

News at 10. Witchhunt for Karen Thurman. Desperate opponents realizing they are losing in the polls, turn to desperate measures to try and discredit Thurman. Ugly politics.

Ugly Politics? I would hate anyone who preyed on others in this manner no matter what their place in society.

Nothing Tina has been accused of even compares to Karen and the way she victimized our military and senior citizens. Karen, how could you? You leak Bernard's family turmoil to the Beacon, yet the Beacon hasn't reported this. You are all the things people call Julie. You have lost my vote over this. My nephew has been to Iraq four times and will be going back a fifth, to protect trash like you!

The Hitler Proganda machine is in full force. Do not believe Julie's lies. She will do anything to have her puppets in action. Trust me, ANYTHING.

JULIE IS EVIL. I don't care if anyone has something to substantiate this comment or not but she is. I watched her at City Council Meetings and I knew she is EVIL. If you vote for evil you get evil. Welcome to the Third Reich!

That is so true, Milton is in turmoil. Wonder when the federal marshals will pick up Karen for victimizing the elderly and our military men and women. I'm so glad Bernard Wolff is running to replace her. He will definitely win now.

The Hitler Proganda machine is in full force. Do not believe Julie's lies. She will do anything to have her puppets in action. Trust me, ANYTHING.

Lies? It is a Stated filed charge and conviction in TN.

I don't know, something seems very fishy about this latest news. Could it be the Bernie/Al/Tina side looking for something? Are you certain Adam Orkin was the one posting that letter to the editor? In cyberspace, anything is possible. Don't believe everything you read here. Go with MIDDLE OF THE ROAD. There are extremists on both sides. Our Mayor knows more about the truth here at City Hall than anyone. I do believe he tends to go with the majority and not the Julie or Jan side. You can bash him after this post all you want but those of us who are more interested in moving on than fighting WHILE PRESERVING what we have in Milton, and know him well, know he is more willing to listen on both sides than anyone on Council. Please consider voting with his suggestion for peace and a forward direction on Council. We cannot afford to be stuck again like the last few years. No Sewer expansion. Large Lots. The mayor wants that and we all want that too. Don't vote the 3 way vote you see all over our streets. They are all getting polarized and in my opinion a dangerous place to go. Don't vote the way your neighbor tells you to. I was one of those people. Now I know better. Just be open to all sides of the argument and make an informed choice and go with your heart, NOT with what someone else tells you.

Good letter Joe. Or did the Bloom write this piece.

Obviously someone that is intelligent and knows the truth wrote it so if Longoria, Lockwood, or Lagerbloom wrote it it sure makes sense.

No, it was not written by a city employee, official or council person but by someone who holds this place very close to their heart. I try to be objective with the knowledge I have about both sides. And I guess, if you knew what I've come to understand about both sides then you would also vote without allegiance or loyalty to any one side.

Milton is witnessing Politics at its best - or worst. So again, I urge you to consider not voting for one platform.

Our city is in turmoil because we have people like Karen Thurman cheating our Men in Uniform.. read the court documents for yourself.
http://www.bindermalter.com/files/12-19-08-10-01-43.pdf

Don't believe it. It's the Julie cheerleaders trying to make sure Bernie is elected so they're frantically trying to come up with something at the last minute.