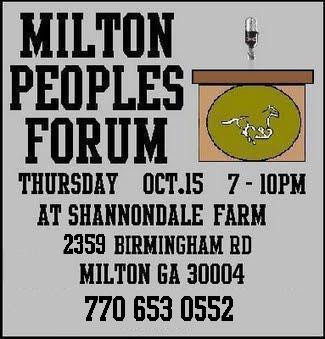 I hope this is the last banner.

Strange we don't see anything about the forum today?
I guess "combover" or "vermin", as they are affectionately called here, must have done well so we aren't talking about it.
Hey, how about the geriatric tantrum Al had? He lost it, bigtime!! Must be frustrating when you make stuff up and no one believes you.
Then Bernie complained about a long response from Milton PD on a domestic at his house?? Good way to cozy up to the cops....not.

Bill Lusk showed up at 8:15 when everyone else was there at 7 pm, and kept the entire forum from starting 30 minutes behind schedule. They should have started with out you or left you out altogether. He then asked the moderators if he could use the bathroom less then an hour later. Tacky doesn't encompass his demeanor or behavior. He was rude to the other candidates and incumbents for showing up so ridiculously late, and also showed no respect to them, the people who put on the event, nor the people who took time out to come and hear everyone speak. His behavior was inexcusible. If someone else had done this to you Bill Lusk you would have made a big scene. then you had the audacity to lecture on morality and character.

- citizen at the Forum

And how smug can Longoria be?? OMG and then to say a whole bunch of NOTHING. "Sodium and Chlorine are poisonous gases but you mix them together and make salt...oh yea, and I don't like your question, you know...you should've asked a different question...oh wait, you know, we need to be thinking more high level and promoting SMART growth and more transportation connectivity (just not through Crooked Creek)...but wait, you know, you know, back to the SALT (I'm sure that analogy made sense, but probably only to my big fat drunk friend Mike Stevens who is a fellow elitist from Crooked Creek)...horse owners are minorities and should drink from separate water fountains...my experience as a Boy Scout leader makes me ready to solve the city's problems..." WHAT A FREAKIN' JOKE!

I hate men, my husband dumped me.

Did I mention that I hate men, hate them, awful. Vote for tidy Tina.
Thank you all for your time.

Mike Stevens is a very well respected resident of Crooked Creek! Be careful how you sling your mud, Tina. Crooked Creek will never support you now!

Anonymous said...
This comment has been removed by a blog administrator.
8:23 PM

The Sky is falling! A CC Resident has been insulted! How dare you to insult the CC mesiah Mike Stevens. He is CC clone after all. Of course, if he lived outside of the city of Crooked Creek, we wouldn't give a flying f$!&**@!