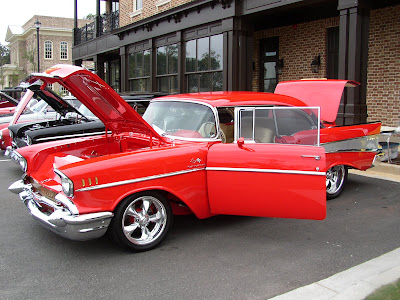 Cold and rainy weather kept the Milton masses at bay as the third annual Milton Round Up kicked off this past Saturday. With a turnout around the 2,000 mark,
the event was held at the public schools in Crabapple for the first time.

Absentees included the Chili Cook off and Charicatures Artists. The car show parade had high hopes as Round Up staff worked with The Olde Blind Dog and their monthly Cruise n, but questionable skies insured low numbers. Best of show went to Pete Peterson and his 57 Chevy.

Highlights were the Milton Band "Rye" who launched their 90 minute
concert at 1pm with audience members dancing on the pavement.
In addition,the pony and teacup rides were always full of smiles.

Politics were a flutter as well with various supporters handing out stickers,t-shirts, bags, and signs to any visitor they could reach. There was also a breif incident among some of the candidates regarding placement of campaign tents.

Who was involved in the "incident"? I am sure Tart was right in the middle of it!

Did TA get a photo op? Gotta build that resume'.

Anonymous said...
This comment has been removed by a blog administrator.
6:42 PM

Anonymous said...
This comment has been removed by a blog administrator.
8:15 PM