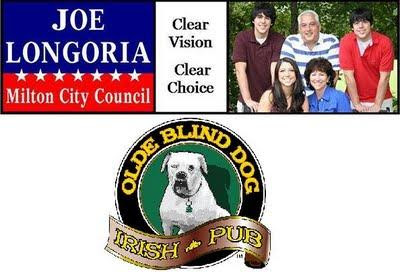 she'll promise you anything you want

then promise your neighbor the complete opposite


that is not leadership

A real leader... who bribes her opponent to try to get him out of the race and then tries to say she didn't do anything unethical -- either stupid or arrogant or both!

By the way - Joe Longoria had a FANTASTIC turnout at his event - including Hizzoner the Mayor...

Wonder when he will use his position to have his first affair. He does resemble Bill Clinton.

Why is Adam Orkin listed as a Longoria supporter? Isn't he a BIG developer in the Hwy. 9 area?

Yes he is a huge developer.

An example of a Development on Highway nine is Deerfield Place, which he developed with Sembler and Devin Properties, an affiliate of Orkin & Associates.

SuperTarget, Kohls, Staples and PETCO are among its tenants.

Don't you hate when the old lines don't work anymore? What else you got?

I haven't followed this local Milton election, nor have I seen anything but an additional bill and alarm fee for my proud citizenship in the city of Milton..but tonight when I went to the mailbox I now have a reason to vote tomorrow...WHAT BONEHEAD INCUMBENT WOULD ALLOW AN ADDITIONAL PROPERTY TAX FEE TO BE MAILED AND RECIEVED THE NIGHT BEFORE THE ELECTION??..If the current elected officials can't remember that little detail of getting re-elected then they must think government is like a social club..nah, this takes the cake, I will now vote tomorrow..count on it.