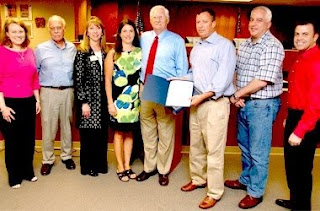 Thompson, who helped launch Hopewell Middle School in 2004 and served as its principal for four years, oversaw Hopewell when it was named a Governor’s Office of Student Achievement 2007 Platinum Award-winning school, the highest level of recognition in the category from the Georgia Department of Education.

Click here to see the proclamation given to Thompson.