Know Your Milton - The Red Wasp! 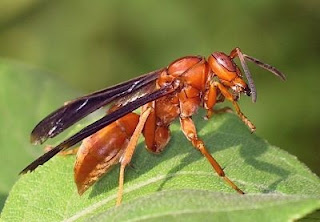 There are more things going on in Milton Georgia than you might think...
The Red Wasp is a type of paper wasp that makes umbrella shaped nests attached by small stem and having a honey-comb-like cells opening to the bottom. The red wasp is a social insect, with each nest occupied by a single queen that lays eggs and similar looking female workers who are her daughters. Males, born only later in the season, perform the sole duty of mating with future queens.

Most members of a nest die at the end of the summer, but the mated queens hide in safe places through the winter and survive to start new colonies the next spring. The females are capable of giving a painful sting but males cannot, as the stinger is actually a modified ovipositior. While red wasps are not particularly aggressive, the tend to build their nests in hidden locations and will sting when these are disturbed. The stings may produce severe reactions in people who are allergic to them.

Red wasps are considered beneficial because they consume caterpillars. The adults actually eat nectar from flowers, but they spend much of their time hunting in order to feed the grubs developing in their nests. If a wasp finds a caterpillar that is too large to carry away, it will cut it up on the spot and sometimes eat some and carry back just a portion to the nest. The bits of flesh are chewed up before being fed to the developing grubs.