Since 2005, Accessmilton.com has covered topics within Northwest Fulton and what is now Milton. To date, our achives have amassed over 3,000 news posts. To search for a particular topic via key words, please use the search window on the right margin.

Of interest was an editorial written by myself in November of 2009 discussing the issues of redistricting and the FCBOE. Due to this topic resurfacing, I thought this editorial might be worth a second look.

To view the original post along with comments, please go here=> 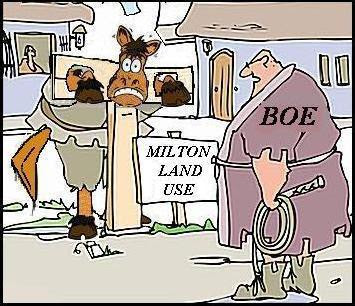 In a city which normally harbors topics along the line of sewer or equestrian related airs, one has to wonder if the Milton constituency has unknowingly taken their eye off the eight ball in the dark corner.

Come the fall of 2013, Milton will have a total of nine public schools within it's borders.

When Bethany Bend High School opens, there will be a major attendance shift with the majority of Milton kids going there while Milton High School will cater to the Roswell crowd.

Oh, and to my neighbors off of Cogburn, sell now or buy some ear protection and plastic bags. The noise will be horrendous and roadside trash will increase three fold.

I have heard the argument numerous times; Fulton doesn't consider school placement by city, it is by the county as a whole. This, in itself, is problematic.

Consider the City of Milton's Vision Statement for example, "Milton is a distinctive community embracing small-town life and heritage while preserving and enhancing our rural character." Right. Phrases such as "small town life" and "rural character" normally give one a feeling of little traffic, quiet, small population and the like. With the infamous FBOE at the wheel, more people will come into the city to attend public schools and not pay a dime for the city funded streets. Oh, you thought the wonderful clan at the FBOE shared in the cost of road improvements? Nope. Dangerous traffic and obnoxious noise will help to push out those whose properties give Milton it's unique feel. They, of course, will sell for the highest and best use just like you would. So forget the mission statement; under the current approach, it is not realistic.

In 2003, the FBOE actually helped kill some of our "rural character" when they kicked out seven families at the corner of Freemanville Road and Birmingham Highway for the "needed" new Milton High. Those families were in tears as board member Katie Reeves slept easy. The old Milton High wasn't fit for students in '03, but today it is ok for the inner city kids...even though no improvements have been made...

Then there are the countless hours given by not only our elected city officials, but also by unpaid city volunteers, from CPAC to the Design and Review Board along with other city apointed committees. All working diligently to insure what we should put where in our humble town to make it the best it can be. Does the FBOE have to follow our requirements or answer to us in any way? Hell no they don't. Can they place a school anywhere they want? Why, Hell yes they can.

I know what you are thinking, "The school board brings alot of money to our city!" Think again, they don't bring a single dime to any city in which they are located. With Milton, however, this is even more deterimental due to our having such little retail to cover the city's expenses. Did I mention that the FBOE is the largest land owner in Milton? Troubling, to say the least.

Mark my words; in less than ten years, you will see another high school built in Milton. This time it will be in the Birmingham Crossroads area.

As I close with this piece of brain fodder, I leave you with a few points. First, I appreciate the education I received from the FBOE thanks to taxpayers like you. I appreciate the teachers who helped make me who I am today - I wish you were paid more but the FBOE spends money like every day is Christmas and harbors zero accountability. I hold no ill will towards the future of America; these kids go where the system points them. However, in a free society, we all have to answer to someone, including the FBOE. The clock is ticking...

Why not explore the possibility of renting Bethany Bendover School to Forsyth County Schools. They could transfer their students from overcrowded schools here and we could leave Milton, Roswell and all others alone. This would be a win win situation, 1. traffic from Forsyth would be north south in city and 2.no student in the named schools would have to transfer.

Before johns creek. milton and sandy springs, the BOE never had to actually work hard at redistricting, but now that n Fulton is made of those cities as well as alpharetta and roswell they are still trying to redistrict and build schools as if those cities don't exist as before. they need to get w the program and adapt to the changes that have occurred in futon, if they don't we will find Board members who will and who actually agree with us and not just "listen" to us.

Ron Tesch for School Board.