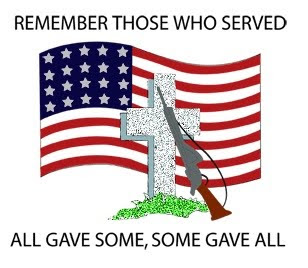 Markers to be placed week before ceremony

MILTON, GA., April 11, 2011 - The City of Milton will hold its fourth annual Memorial Day ceremony May 30 and in preparation is adding veterans into the city's registry of service men and women.

Through more than two years of hard work and the generosity of residents, Milton has amassed a list of more than 300 living and fallen veterans, 144 of whom are memorialized with markers placed on Deerfield Parkway the week of the holiday.

Each year residents ask how their family members may be added to the registry. The city does not have access to a government database revealing who served in the military. Instead, we need you to tell us.

There is also an online form available anytime at the City of Milton Web site. You may either click here or go to www.cityofmiltonga.us. To access the form, click on the "Find a Form or Permit" tab at the top of the page and choose "Register military veterans' information" from the "Online Forms" section at the top of the page.

Once you give the City of Milton the information, it will be placed in a secure database. The names will then be sent to City Councilman Bill Lusk, who for three years has personally built, painted, engraved and placed the markers at his own expense.

The City of Milton's Memorial Day Ceremony will take place 10 a.m. Monday, May 30 at City Hall. This year's featured speaker is retired U.S. Air Force Col. Murphy Neal Jones of Covington, who was shot down over Vietnam in June 1966 and spent seven years in the infamous "Hanoi Hilton" prisoner of war camp. Upon his release in February, 1973, Jones continued his career in the Air Force, retiring as a colonel.

Please join us to remember the sacrifices made for our freedom.