Know Your Milton - The Yellow Jacket! 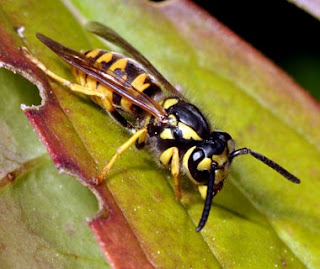 With Spring upon us in Milton, insects are coming out of their long winter hibernation. From spiders, to butterflies, to bees - all are back and active.

Residents are also working in their yards more...

One aggressive resident, the Yellow Jacket wasp or "Yellow Jacket" as it is locally refered to, can be very dangerous and possibly fatal. To find out what happens when you disturb a nest, view the video below.

The Yellow Jacket or yellow-jacket is the common name in North America and Milton Georgia for the predatory wasps of the genera Vespula and Dolichovespul. Members of these genera are known simply as "wasps" in other English-speaking countries. Most of these are black and yellow; some are black and white, while others may have the abdomen background color red instead of black. They can be identified by their distinctive markings, small size (similar to a honey bee), their occurence only in colonies, and a characteristic, rapid, side to side flight pattern prior to landing. All females are capable of stinging which can cause pain to the person that has been stung. Yellowjackets are important predators of pest insects

A typical yellowjacket worker is about 12mm (0.5 in) long, with alternating bands on the abdomen while the queen is larger, about 19 mm (0.75 in) long (the different patterns on the abdomen help separate various species.) Workers are sometimes confused with honey bees, especially when flying in and out of their nests. Yellowjackets, in contrast to honey bees, are not covered with tan-brown dense hair on their bodies and lack the flattened hairy hind legs used to carry polen. Yellow jackets have a lance-like stinger with small barbs and typically sting repeatedly, though occasionally the sting becomes lodged and pulls free of the wasp's body; the venom, like most bee/wasp venoms, is primarily only dangerous to those who are allergic, unless a victim receives a large number of stings. All species have yellow or white on the face. Mouthparts are well-developed for capturing and chewing insects, with a proboscis for sucking nectar, fruit, and other juices. Nest are built in trees, shrubs, or in protected places such as inside human-made structures (attics, hollow walls or flooring, in sheds, under porches, and eaves of houses), or in soil cavities, mouse burrows, etc. Nests are made from wood fiber chewed into a paper-like pulp.


Yellow jackets' closest relatives, the hornets, closely resemble them but have a much bigger head, seen especially in the large distance from the eyes to the back of the head.

Yellowjackets are social hunters living in colonies containing workers, queens, and males. Colonies are annual with only inseminated queens overwintering. Fertilized queens occur in protected places such as hollow logs, in stumps, under bark, in leaf litter, in soil cavities, and human-made structures. Queens emerge during the warm days of late spring or early summer, select a nest site, and build a small paper nest in which eggs are laid. After eggs hatch from the 30 to 50 brood cells, the queen feeds the young larvae for about 18 to 20 days. Larvae pupate, emerging later as small, infertile females called workers. By mid-summer, the first adult workers emerge and assume the tasks of nest expansion, foraging for food, care of the queen, and colony defense.

From this time until her death in the autumn, the queen remains inside the nest laying eggs. The colony the expands rapidly reaching a maximum size of 4,000 and 5,000 workers and a nest of 10,000 and 15,000 cells in late summer. At peak size, reproductive cells are built with new males and queens produced. Adult reproductives remain in the nest fed by the workers. New queens build up fat reserves to overwinter. Adult reproductives leave the parent colony to mate. After mating, males quickly die while fertilized queens seek protected places to overwinter. Parent colony workers dwindle, usually leaving the nest and die, as does the foundress queen. Abandoned nests rapidly decompose and disintegrate during the winter. They can persist as long as they are kept dry but are rarely used again. In the spring, the cycle is repeated (weather in the spring is the most important factor in colony establishment.)Although adults feed primarily on items rich in sugars and carbohydrates (fruits, flower nectar, and tree sap), the larvae feed on proteins (insects, meats, fish, etc.) Adult workers chew and condition the meat fed to the larvae. Larvae in return secrete a sugar material relished by the adults. This exchange is known as trophallaxis. In late summer, foraging workers change their food preferences from meats to ripe, decaying fruits or scavenge human garbage, sodas, picnics, etc., since larvae in the nest fail to meet requirements as a source of sugar. This is why yellowjackets are known largely as pests that are capable of ruining picnics. Although they lack the pollen-carrying structures of bees, yellowjackets can be minor pollinators when visiting flowers.

In Milton Georgia, yellowjackets are primarily found in ground. Thus, be sure to walk an area prior to clearing or cutting the grass.

If stung, call 911 and / or seek Doctor attention immediately!

Shouldn't you have posted "get to know your hornets"?