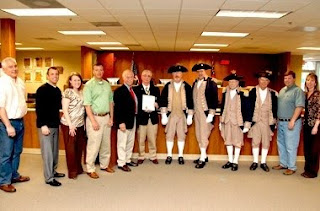 At its last meeting, Milton’s City Council was joined by the Sons of the American Revolution, Piedmont Chapter, in proclaiming Monday, April 18 “Patriots Day.”

The designation honored the brave patriots of April 12, 1775, who rode their horses through the Massachusetts countryside to warm fellow colonists British troops were coming.

For more information on the proclamation, including a quick history lesson on explanation of the City of Milton’s namesake, John Milton, click here.

Yeah - just like Massachusetts!! The whole state should get on board!!!