Tragedy at A Milton Landmark. 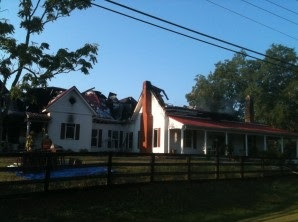 In the early hours of September 13th the Seven Gables Farm, a 150 year old farmhouse owned by John and Gail Bogino, caught fire and was consumed. Thankfully the Boginos’ were just able to make it out without injury. Most of their pets were saved; two cats and two dogs were not able to be found before flames took over the rest of the home.

If you have lived in Milton or Alpharetta for any amount of time then you know the Seven Gables Farm. Many of you know John and Gail personally. Both their farm and their family are interwoven into Milton. Maybe you haven’t met them personally but you’ve stopped the car along the fence to let your kids look at the goats and alpacas in the pasture. If you did, they probably invited you in to let your children pet the animals.

Friendly to everyone, nobody is a stranger at Seven Gables. In fact, just this morning John chastised me for not asking him to bring is tractor over to dig post holes for my new deck I’ve been working on. He said this as we stood outside the charred remains of his home, watching the fire department ensure all fires were out.

So, if you know them or even if you don’t, please stop by in the coming days to wish them well. I speak for all of the community when I say I’m so thankful that no one was hurt, but I’m sure they would like to hear from you.

Accessmilton.com addition - Many thanks to Milton Resident Bob Strader for bringing this story to the attention of our readers. Much like Bob has relayed , it is imperative that the Milton community support the Bogino family during this difficult time. If you would like to help, please reach out to Bob, Accessmilton.com, and Protectmilton.com.

Many thanks to the Milton Fire and Police Departments for helping those in need.

That is aweful - please post ideas on ways we can help...

You may also get involved thru The Milton Love Project if you are interested in offering support and love for the family.

Send cards, send prayers, but mostly don't be shy and say hello... In your very own way.