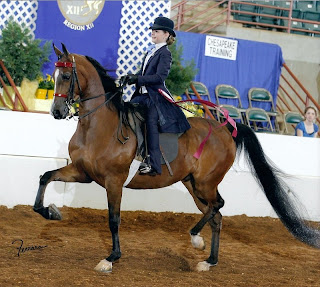 
Congratulations to King's Ridge Christian School fourth grader Kayla Hipp on being named the 2011 U.S. National Champion Arabian English Rider for the 10-and-under age group. Hipp won this distinguished honor at the U.S. Youth National Championships in Albuquerque, N.M. in late July, in what was her first appearance at the Nationals.

Kayla and her horse, Millady, had only been together for three months when she qualified for the championship at an event in Louisville, Ky. After qualifying, she came through elimination classes that cut the field from 32 to 15 riders for the final, and a three judge panel recognized her as the best rider in the country for this competition. Additionally, she placed in the top 10 in her other two competitive classes.