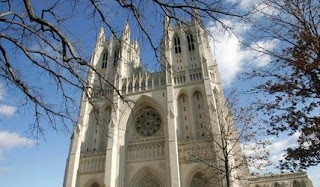 National Cathedral Invites Muslims, but Not Evangelicals to 9-11 Service.

A weekend of religious-themed observances at Washington National Cathedral marking the tenth anniversary of the September 11th terrorist attacks will include a Buddhist nun and an Imam, but not an evangelical Christian, leading the head of the Southern Baptist Convention to ask President Obama to reconsider attending the event.

“A Call to Compassion” will include an interfaith prayer vigil on Sept. 11th. It will feature the dean of the Cathedral, the Bishop of Washington, a rabbi, Buddhist nun and incarnate lama, a Hindu priest, the president of the Islamic Society of North America and a Muslim musician.

However, Southern Baptists, representing the nation’s largest Protestant denomination, were not invited to participate – and neither were leaders from any evangelical Christian organization.

“It’s not surprising,” said Frank Page, president of the Southern Baptist Convention Executive Committee. “There is a tragic intolerance toward Protestants and particularly toward evangelicals and I wish the president would refuse to speak unless it was more representative.”

Not one comment posted regarding this article. This is America. Stand up for what is right and what is wrong.

No one comments because we are all too busy in our own little lives to stand up and pay attention. Let your next door neighbor do it for you, or the guy down the road who you know will say something. It's being handled, we don't need to be involved! That is what is wrong with this country. If I lived in NY, I would boycott the entire thing for shunning Prayer and refusing to make room for the first responders. But it is so important to have a Hindu Priest, and an Imam at the National Cathedral. Obama calls for us to get along, really, who is he referring we get along with? Those who want to kill us? We have to be tolerant to those who constantly kill us and anyone who is not one of them. We have mosques popping up like popcorn all over this country and are being infiltrated from the inside and we are all so stupid to even pay attention. When the shit hits the fan, then what will Americans do, be tolerant? How do you tell a peacefull Muslim from a radical terrorist Muslim in America, in your town, existing beside you on an everyday basis? Do you know the difference? Is a radical terroristic Muslim going to act any different than a peaceful one until one day? It's the peaceful Muslims who need to irradicate the radical ones if they want to live in America without the big hairy eyeball on them. It's not American's fault that we are skeptical or suspicious of them. Today is 9/11 for God's sake. That should be reminder enough.