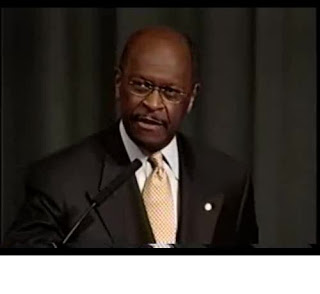 Many thanks to Steel Magnolia for sharing this information with us about Presidential Candidate Herman Cain.

Subject: Did you know this about Herman Cain?
I just found this Bio on Herman Cain;

Herman Cain is running for president. Heâ€™s not a career politician (in fact he has never held political office). Heâ€™s known as a pizza guy, but thereâ€™s a lot more to him. Heâ€™s also a computer guy, a banker guy, and a rocket scientist guy.

Hereâ€™s his bio:
Bachelorâ€™s degree in Mathematics.
Masterâ€™s degree in Computer Science.
Mathematician for the Navy, where he worked on missile ballistics (making him a rocket scientist).
Computer systems analyst for Coca-Cola.
VP of Corporate Data Systems and Services for Pillsbury (this is the top of the ladder in the computer world, being in charge of information systems for a major corporation).
All achieved before reaching the age of 35. Since he reached the top of the information systems world, he changed careers!
Business Manager. Took charge of Pillsburyâ€™s 400 Burger King restaurants in the Philadelphia area, which were the companyâ€™s poorest performers in the country. Spent the first nine months learning the business from the ground up, cooking hamburger and yes, cleaning toilets. After three years he had turned them into the companyâ€™s best performers.
Godfatherâ€™s Pizza CEO. Was asked by Pillsbury to take charge of their Godfatherâ€™s Pizza chain (which was on the verge of bankruptcy). He made it profitable in 14 months.
In 1988 he led a buyout of the Godfatherâ€™s Pizza chain from Pillsbury. He was now the owner of a restaurant chain. Again he reached the top of the ladder of another industry.
He was also chairman of the National Restaurant Association during this time. This is a group that interacts with government on behalf of the restaurant industry, and it gave him political experience from the non-politician side.
Having reached the top of a second industry, he changed careers again!
Adviser to the Federal Reserve System. Herman Cain went to work for the Federal Reserve Banking System advising them on how monetary policy changes would affect American businesses.
Chairman of the Kansas City Federal Reserve Bank. He worked his way up to the chairmanship of a regional Federal Reserve bank. This is only one step below the chairmanship of the entire Federal Reserve System (the top banking position in the country). This position allowed him to see how monetary policy is made from the inside, and understand the political forces that impact the monetary system.
After reaching the top of the banking industry, he changed careers for a fourth time!
Writer and public speaker. He then started to write and speak on leadership. His books include Speak as a Leader, CEO of Self, Leadership is Common Sense, and They Think Youâ€™re Stupid.
Radio Host. Around 2007â€”after a remarkable 40 year careerâ€”he started hosting a radio show on WSB in Atlanta (the largest talk radio station in the country).

He did all this starting from rock bottom (his father was a chauffeur and his mother was a maid). When you add up his accomplishments in his lifeâ€”including reaching the top of three unrelated industries: information systems, business management, and bankingâ€”Herman Cain may have the most impressive resume of anyone that has run for the presidency in the last half century.