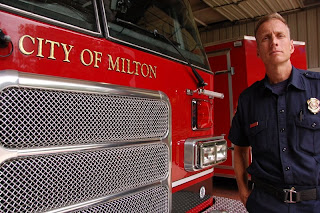 Snyder, who has more than 18 years in the fire service, completed the 2.4-mile swim, 112-mile bike ride and 26.2-mile run in Louisville, Ky., capping off years of training that included triathlons, marathons, stair climbs and half-Ironmans.

"There were definitely times when I was doing a 100-mile bike ride and it was 95 degrees outside where I thought, 'I'm going to die out here,'" said Snyder, who also spent the last few months studying for a fire service promotional exam. "But you push through it and go through barriers you never thought your body could."It's an accomplishment that Fire Chief Robert Edgar doesn't take lightly.

"It is no secret firefighters need to be physically fit," he said. "We promote and require every firefighter to maintain a certain level of fitness in order to perform his or her job in a safe and efficient manner - and Danny has taken that philosophy to the ultimate level."
Edgar said Snyder is an asset to the department and a motivator for his fellow firefighters.

"We are very proud and fortunate to have Danny as a member of our team," he said.

Snyder is already planning on competing in another Ironman race in Panama City Beach in 2012. Right now he's in a "maintenance" training phase, which he will ramp up to the eventual seven hours a day of biking, running and swimming he needs to compete in the race.

"All this training is for me - it's so I can be an Ironman and no one can take that away from me," he said. "But if I can just inspire others to just get in motion, that means a lot to me."