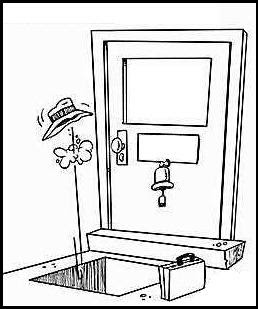 By Andria Simmons
The Atlanta Journal-Constitution
A Milton couple who recently purchased a house discovered a feature that wasn't listed among the amenities: a trapdoor leading to a secret room.
Workers were pulling up the carpet at the house on Nix Road to install a hardwood floor when they stumbled across a plywood trapdoor, according to a Milton Police report. Stairs underneath the trapdoor led to a room behind a walled-off portion of the basement.
The workers contacted the homeowners, who then called police. Officers used their flashlights to search the darkened room. It was mostly cleaned out, but they discovered a large trash bag containing "miscellaneous equipment that could be used in the growing of marijuana plants," the police report stated.
The couple told police they purchased the four-bedroom, three bathroom home at foreclosure in December and were in the process of renovating it. They said the house had been inspected twice in September and October of 2009. The trapdoor went undetected both times. The house was built in 1995.
The police report indicates that investigators are looking into whether the prior homeowner was involved in growing and harvesting marijuana. Capt. John Huey of Milton Police would only state that "the investigation is ongoing."
The homeowners declined to speak on the record about the discovery and asked that their specific address not be revealed, citing safety concerns.
Many thanks to Travis Allen for bringing this story to our attention.
Posted by Accessmilton Admin at Wednesday, January 27, 2010

Anonymous said...
This comment has been removed by a blog administrator.
2:07 PM

I am willing to bet you that them previous folks that lived there grew some of that marijuanna!

Anonymous said...
This comment has been removed by a blog administrator.
1:57 AM

Perfect graphic for an amazing story.

They must have been digging their way to connect to the sewer line!

Maybe Julie was waiting outside to hug them and it was the only way out?

Did they find any overpriced computers to sell to the military?

Good dispatch and this fill someone in on helped me alot in my college assignement. Say thank you you as your information.