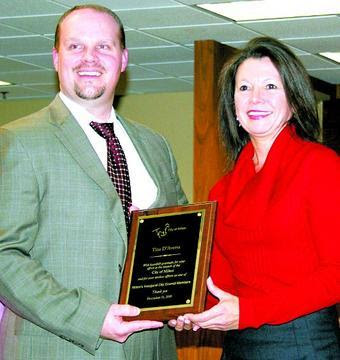 Courtesy Jonathan Copsey / Appen Newspapers
MILTON - Last week was a busy final meeting for Council member Tina D’Aversa. With a docket filled with items, most of which were unanimously passed by the council, it was also an easy last meeting.
Members of the community, as well as her fellow Council members, came forward to express their support for D’Aversa and the work she has done for the city.
"For the last three years, Tina has spent untold hours and a lot of work for the City of Milton," said Mayor Joe Lockwood. "I’ve always enjoyed working with Tina and have always respected her. We haven’t always agreed on all issues, and to me that’s fine. We’ve had healthy discussions. She has been a huge benefit. I think a lot of Tina both personally and professionally. I sincerely hope she stays involved with the city in other capacities. She’s valuable and truly cares about the City of Milton."
"She has accomplished so much on behalf of the citizens, with dedication that is unmatched," said fellow council member Julie Zahner-Bailey. "It has truly been an honor to work with her."
D’Aversa lost her re-election bid to Crooked Creek resident Joe Longoria, who will begin his term in the new year.
Longoria will be sworn in during the first City Council meeting on Jan. 6.
Posted by Accessmilton Admin at Tuesday, January 05, 2010

Whatever happened to the ethics charges? Was she cleared?