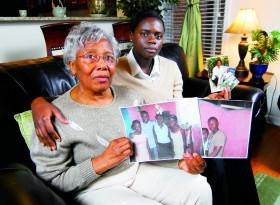 Rescue brings hope to Haiti natives
By Rachel Kellogg / Neighbor Newspapers
Julienne Jeune, who moved to Milton from Haiti four months ago, and her cousin Germaine Simon were relieved to find out after three days of worrying that their family members in Haiti were alive.
“I was upset and nervous about what happened to our families,” said Ms. Simon. “For three days, I was thinking they were all gone. It’s a miracle that they are alive.”
Ms. Simon’s niece, who was pulled from the rubble of the five-story school she attended, was injured.
But she and the rest of the family members who were in Port au Prince during the Jan. 12 earthquake have made it to safety in the city of Hinche.
Ms. Jeune, 26, has been in contact with her family and said they are living with fear and uncertainty for the future.
“Port-au-Prince was everything. There are small towns in the country, but everyone wanted to go to Port-au-Prince,” she said. “Now they have nothing to do, no universities and no jobs.”
Ms. Simon’s nephew just finished school and was excited to start working in Port-au-Prince, but now he has gone to the Dominican Republic to look for work.
Though separated from their homeland by more than a thousand miles, Ms. Jeune and Ms. Simon are still trying to help the victims of the quake.
The cousins have been working with their church, the Milton Ward of the Church of Jesus Christ of Latter-day Saints, packing boxes of food and supplies being sent by the church to Haiti.
Last week more than 300 volunteers from the church packed 918 supply boxes—a total of 80,000 pounds— to send to survivors in Haiti.
Ms. Simon said she and her family are grateful for all the relief efforts in north Fulton and all over the world.
“There are great people in this world. The love and the effort that I see is overwhelming,” she said. “It makes me feel wonderful.”
The retired bookkeeper who left Haiti in 1981 also said she is thankful for those who are traveling to Haiti to help out.
The church is going to reach out to the families and help them survive the aftermath.
The church is also helping Ms. Jeune obtain a visa to stay in Milton and realize her dream of attending a university.
Posted by Accessmilton Admin at Friday, January 29, 2010

the article is great! i loved it

News will always be news !!!
Too little or too much = exageration NEWS.