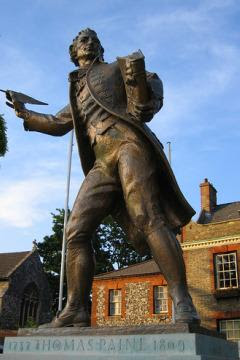 Thought this would be of interest to our readers.
What happened to the Revolutionary War heroes that weren't lucky enough to eventually get elected to the office of President of the United States? Obviously, they can't be celebrated on President's Day. The answer: If they're lucky, the got their very own holiday, like Thomas Paine.
On January 29th, Americans (very few of them) celebrate a holiday dedicated to the philosopher who authored the famous "Common Sense" pamphlet -- Thomas Paine Day, also known as Freethinkers Day: "Freethinkers Day, also known as Thomas Paine Day, is an opportunity to promote appreciation of free thought thought the life and works of Thomas Paine. Free thought supports reason over faith, and rejects arbitrary authority."
Aside from lending his pen to the struggle for independence, Paine was also a soldier in the revolutionary army and became secretary of the Congressional Committee on Foreign Affairs ... until his free-thinking eventually got him expelled.
Since the holiday is not widely celebrated (I'd never even heard of it before), the way to properly celebrate Freethinker's Day is limited only by your imagination, ironically. And though it feels strangely contradictory to suggest ways to celebrate Freethinker's Day, plenty of people have done it. Thomas Paine Day is best enjoyed by visiting Thomas Paine monuments, like Paine's New York cottage, and pondering (freely) over some of the thinker's most heralded works.
Posted by Accessmilton Admin at Friday, January 29, 2010

Lots of free thinking folks in Milton,as presented here on this blog!

I'm a fifth-grade teacher in Colorado, and a crucial part of teaching civics is providing students with our primary sources: the founding documents. This is critical in understanding what “We the People” means. Today, like 230 years ago, those documents instill in students the belief that all voices are important. Every one of our citizens is needed to pursue liberty. Futures do not have to be inevitable and "Little voices" can make dramatic impacts on events. That is Paine's greatest contribution to our country. His pamphlet, Common Sense, spoke to all the voices in the 13 colonies during a time of great indecision. He gave a vast number of citizens a vision of what each could do, 176 days before the Declaration. A belief that power should radiate from the citizens. That message is still foundational for all our students today.

Mark Wilensky,
author of "The Elementary Common Sense of Thomas Paine: An Interactive Adaptation for All Ages"