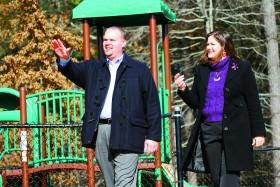 Since breaking the connection to consultant CH2M Hill last year and electing to bring all personnel functions in house, Milton officials have been busy revamping and streamlining

Seven city positions in place under the consultant’s contract are no longer on the books, according to City Manager Chris Lagerbloom.

“We are right-sizing for our city size of around 20,000 [residents] and it’s made us more efficient,” he said.
Council members culled five jobs in October during the budget process. “We had more administrative and assistant secretaries than we needed,” Lagerbloom said. “Now we all share the load. We don’t need people just to make copies and answer phones.”

Two more positions, special events coordinator and one of four in the IT department, were cut recently, Lagerbloom said.

City Clerk and Clerk of Courts Jeanette Marchiafava has also left City Hall, but not because the job was eliminated. Lagerbloom said he could not discuss the particulars of her exit but noted it was due to a personnel issue. He said he expects council to ratify the appointment of Deputy Clerk Sudie Gordon as interim clerk Jan. 6.

The duties of planning and coordinating the city’s special events are being blended into the parks and recreation director’s job description. Milton’s first-ever parks and recreation director, Cyndee Bonacci, starts this week at a salary of $85,000. Bonacci held the same position in Snellville, where she won 2008 Distinguished Professional of the Year for the Georgia Recreation and Park Association.

“She comes with a pretty amazing background, with quite a record of success in visioning, parks master planning and build out,” Lagerbloom said.

Milton now has 54 fire employees, 26 in the police department and 29 general government employees.

85k for a parks director, your kidding, right.

Is there an opening for assistant parks director?

We are paying 85K of our limited financial resources for a parks
Director? Way to go Milton and City Council!!!

What do we pay our Policemen ?

What do we pay our Firemen ?

Someone please explain to us how the position of Parks Director warrants a salary of 85k.

how much ya wanna bet that she has a direct line or dotted line connection to someone at city hall or a person of influence residing in our city limits? it wouldn't be surprising.

This person was probably hired to create/service a parks and recreation committee, a parks and rec ordinance, etc. This is the point where they get to decide where, and how big, to put the baseball, soccer and lacrosse fields based on who listens to who and how much influence they have in the City.

Maybe now we can get some morning tai chi classes going at Birmingham Park.

Chris, you should know by now that Milton has more than 20k people.

How can we save for a Milton Recreation center like Alpharetta's if we are blowing the money out on director of nothing?
We don't need 6 council seats either! Wake up Milton, your money is being wasted fast.

AS an official from Cindy's last city, Snellville, I assure you that you will get your money's worth. She is a class act that works extremely hard and gets things done. Congrats Milton on a great hire.

LOL.. One park to watch over and 85k for doing it.. Sounds like a great job to me.. This might be the reason the city clerk was fired to help fund this position. Looks like Chris will surround himself with a bunchof ladies to do the work.. Hummmmm...

I heard Linda Blow made about $75k per year. Don't hate the player, hate the game.

Youre not telling the truth are you now?

Alice Wakefields position paid over $100K, wonder what Wilson is making now that she is gone and he's back in the saddle unfortunately. Like a boomerang, keeps coming back no matter how hard you throw it away.

At least we are downsizing right, with people that is, but upsizing the salaries. Fire and Police should be paid more then Parks, they put their lives on the line every day. Priorities.

Does anyone know what we were paying the last parks director thru ch2? Wonder if it was more or less than 85?

We were never paying a Parks Director, either through CH2 or other means. There wasn't one. Wake up!

Wake up yourself, can you say "Brad Chambers"?

Chris, Wills Park was run by volunteers for YEARS!!!!!!!!!!! before the City of Alpharetta purchased it. We had 4 ballplayers to come out of Wills Parks to go on to the Minor Leagues and Major Leagues while under this volunteer staff. No money was paid to these volunteers, just a lot of hard work and a lot of volunteer time.

Pay the firemen and policemen more and get rid of this person until we do have more parks in Milton and the money to support this.

I know Linda Blow personally and she in no way made $75k or $85k, are you kidding me. Whatever she made and I won't share that amount on this site, Chris thought it was too much. He didn't think she was worth what she was making. AND, she was offered a receptionist position AFTER her last day. Knick, knack, paddy wack, throw the dog a bone... She declined.

The baseball program at Bell Memorial is run by Hopewell volunteers, not by the city. Milton also has a volunteer-run Parks Committee to help with planning. The issue is not that Milton has no one to run our parks - it's that there's no money in the budget to do anything with our parks.

I think I know where you can find $85K in the budget to do stuff with the parks.

Bloom doesn't have a Public Administration or even a Political Science degree, just Criminal Justice. CJ doesn't teach one how to run a city. Maybe Bloom needs to take some classes in Public Adm at Reinhardt on the nights he isn't teaching.

Wrong.
He has an MPA from a reputable masters program.
At least he didn't get it over a weekend on the internet for a couple hundred bucks, like some.

He has a Master's in Criminal Justice from the Command College in Columbus. That is not an MPA. Big difference.

He's a cop. He thinks like a cop, acts like a cop, surrounds himself with public safety people and manages like a cop. Regardless of the education - he's a cop, not a city manager.