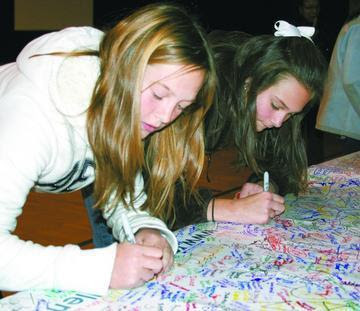 Rachel Joy Scott spoke before several assemblies of the student body about five codes of ethics that each child should strive to live by.

By the end of the school day, more than 400 of these children had pledged to follow by Rachel's words of guidance.

What is more surprising is that Rachel has been dead for 10 years now.

Rachel was the very first victim of the Columbine massacre that occurred at Columbine High School in Colorado April 20, 1999, the first of 13 victims to be brutally gunned down by two classmates.

Through the efforts of her family and friends and the moving words she kept in a half-dozen notebooks, Rachel's words preaching kindness, understanding and love have reached the ears of more than 12 million people, including presidents, athletes and actors.

Her story was brought to Northwestern by the student body. A poll had been taken regarding bullying and the vast majority of students admitted to some form of bullying.

To combat that, the students searched for a program aimed at teaching respect and kindness.

"We do a lot of things for respect and bullying, and this program really helps,"

said Principal Bruce Fraser. "It has made a huge difference."

Through five simple steps, Rachel predicted that the world can be made a better place, so long as everyone does their part. They were included in a short essay she wrote just six weeks before her death.

The first code is "Look for the best in others." Only by getting to know the personality within people can one truly get to know them.

First impressions are not always correct. Only by making an effort to make a friend can eliminate you prejudices.

Her killers chose April 20 because it was the birthday of Adolf Hitler, a man they idolized. Rachel, on the other hand, chose to admire Anne Frank, a Jewish teenager killed during World War II. Like Anne, Rachel's life is remembered most through her journal writings and ideals of a better world. You get out of life what you put into it, and keeping positive influences leads to a positive life.

"Kind words and acts of kindness"

can open up doors normally closed. Rachel's kindness touched many students in her school. Through the Rachel's Challenge program, her message has touched millions.

"It's really touching and really sad,"

said one woman who saw the program and whose son is a seventh grader at Northwestern. "He was very touched by it. He thought it was good."

"This is probably the most motivated middle school I've ever had,"

said speaker J.B., who was amazed at the reaction of the Northwestern students. "You don't normally get that in middle schools."

The final code is by far the most important: "Start a chain reaction" and pass along her message and accept her challenge of making a better world.