Three families get homes for Christmas 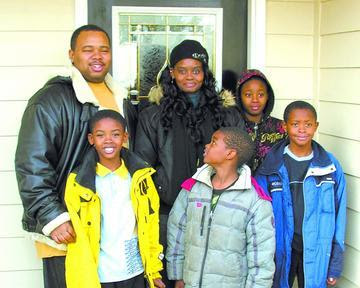 Courtesy Jonathan Copsey / Appen Newspapers
MILTON – Three lucky Milton families were able to celebrate Christmas in new homes thanks to Habitat for Humanity.
The first home was built for the Banks Family, who were displaced by Hurricane Katrina. Claude and Rhonda are the proud parents of four children ages 7, 8, 9 and 11. Claude was able to transfer his position with Whole Foods in New Orleans to Harry’s Farmers Market in Roswell. The Banks family home is part of the annual "Ecumenical Build" and is sponsored primarily by local churches including St. James UMC, St. Peter Chanel Catholic Church, St. Thomas Aquinas Catholic Church, St. David’s Episcopal Church, Roswell Presbyterian Church, Alpharetta First UMC, Roswell UMC, St. Aidan’s Episcopal Church, Northview Church of Christ and the Roswell Convoy of Hope, and by one civic partner, Phi Phi Omega chapter of Alpha Kappa Alpha Sorority, Inc.
The second home was built for the Groves Family. Mary Ann and her 15 year old son were also victims of Hurricane Katrina. Mary Ann and her son came to Alpharetta to live with her daughter temporarily. This second home is also a part of the Ecumenical Build with Mt. Pisgah UMC and St. Brigid Catholic Church as the primary sponsors. This was a significant event in that it was the third time the local churches in North Fulton have partnered to build a home in the Centennial Village development. In total, 11 local churches joined efforts to build the two homes.
The third home was built for the Abderrahmane family. El Habib and Louiza have two children ages 1 and 5. They are originally from Morocco and have lived in the North Fulton area since 2000. El Habib is employed at a local Publix supermarket. The sponsors for Abderrahmane family home were Cisco Systems, Travelers, BB&T and Ashworth College.
At a dedication ceremony held before the holidays, all of the families thanked the volunteers and sponsors for their efforts. Claude Banks said that he was "truly blessed because his family finally has a place to call home."
Habitat for Humanity of North Central Georgia has a long-standing history of providing affordable housing to deserving families. Since its inception in 1993, 186 homes have been completed and approximately 750 family members have been served in the North Fulton, Cherokee, Dawson and Forsyth Counties.
Families are chosen on the basis of need for adequate housing, ability to pay the mortgage and their willingness to partner with Habitat. Each family is required to attend 10 educational classes and perform 300 "sweat equity" hours, 50 of which must be completed by each spouse on their own home. Family members work side by side with the volunteers and Habitat staff to build their home. These families not only get to experience the pride of homeownership but they also know that their lives will be changed forever.
Posted by Accessmilton Admin at Wednesday, January 06, 2010

We need many many more habitat for humanity homes in Milton and fewer mansions.

But they need sewer!

We do not NEED habitat houses in Milton! Give me a break! We've worked hard all our lives to afford this quality of life we've built here. Get over yourself. We do not need to water down our area to make it look just like any other town or municipality. Go to the south side to get your Habitat house. There are plenty of them in Stockbridge, Forest Park, College Park, etc. Live within your means, people, and quit looking for entitlements. If you want sewer, go where they already are in place, and stay out of our backyards!

The last poster is wrong. My family was contacted by habitat in nov about using our old farm In milton for a habitat house dev. and we are considerng it now.

We would not be considering it if all the subdivisions never came.

However, now we boarder a subdvision and our farm is no longer quit and the people in the subdvisn keep putting their yard clippings and branches on our property. Very rude and loud but most people in these snooty subdivisoins are rude.

If we can give those who are less fortunte a place to call their own, then we are open to it.

Also, the rude subvision people will now what it feels like to have an area change for the worse.

What goes around comes around

Hope these people will enjoy their new homes despite the snooty crass nature of the hard working Miltonites who want to shelter themselves from the general public.

They sure will have lots of new victoms to steal from!

Julie will fight them off for us, thanks Julie!