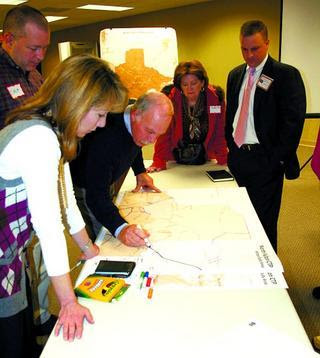 January 25, 2010 MILTON - Local residents who participated in a North Fulton Comprehensive Transportation Plan meeting on Jan. 19 at Milton City Hall identified most of the same transportation headaches seen in previous studies by experts. Arnold Mill Road, McGinnis Ferry Road, Birmingham Highway, Ga. 400, Hwy. 9 – all of these roads and more were identified as problem areas.
The 20 or so Milton residents took part in the “charette,” an interactive meeting to gauge their opinions, breaking into separate groups under the direction of representatives of the firm Kimley-Horn. That firm was contracted by the Atlanta Regional Commission (ARC), which in turn was asked by North Fulton’s municipalities to help create the transportation plan.
The nightmare scenario of Ga. 400 with eight lanes in either direction caught the attention of those in attendance, pushing home the concept that the age of widening roads to meet traffic concerns is over.
“For the past few decades, the way that we addressed congestion was to widen roads,” explained Cristina Pastore, of Kimley-Horn, “but as we’re starting to see, that’s not necessarily the way that we can continue to do this. We can’t continue to widen roads... so we’ve got to talk about sustainability and options.”
Without the option to widen roads, there are very few alternatives to ease traffic flow throughout the region. Unfortunately even public transport is unlikely to reach the majority of Milton - forget heavy rail at any time in our lifetimes, but even simple bus service is restricted. Milton’s one-house-per-acre preference is a far cry from the four per acre that MARTA uses as the minimum threshold for new bus routes. The best that could be had would be more Park and Rides, which some residents at the meeting whole-heartedly supported.
What many of the residents would do to improve traffic flow was perhaps different from the typical list of intersection improvements. Many suggested improving ways to direct traffic around the city instead of through it - a new road to the north could connect Cherokee County commuters to Ga. 400 without the need for them to even come into the city, for instance. A dedicated express lane on high-traffic roads such as Arnold Mill Road was suggested for those commuters wanting to cut through North Fulton en route to elsewhere.
Of particular concern was the proposed new Ga. 400 exit at McGinnis Ferry Road that would add significant traffic to an otherwise calm area of the city. Should that ever be built, Milton would have to start taking action soon to improve the roadways.
According to Pastore, Kimley-Horn will sift through all the suggestions offered by Milton and compare them with those offered by the surrounding cities to create the beginnings of a North Fulton transportation plan, full of projects the cities can all get behind and go to the state for funding.
Posted by Accessmilton Admin at Tuesday, January 26, 2010

I see Julie Bailey? Making sure she is in the picture?

Looks like combover boy got in on it also.

She is just so pretty!

In the meetings she has some good ideas till she starts to repeat herself to to her herself talk. Say what you got to then let others talk. Sometimes you can say to much !

She ALWAYS says too much!

Who were those councilmembers who skipped the RFP process and arranged to have a developer of a foreclosed property present his ideas to council?

I believe it was Julie and Alan that were promoting the Windward site on their emails and having an illegal council presentation.

Watch out if Karen's lending company was offering the loan for the site. That company's in deep doo-doo.