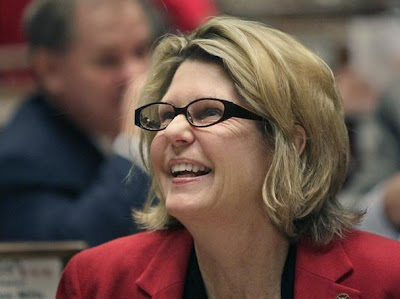 She has a husband, four kids and two dogs -- one named “Hotshot,” the other, “Rocket.” She likes to garden. She often reads herself to sleep at night.

Legislature. The 51-year-old Jones, a Republican lawmaker from Milton, was last week elected speaker pro tem of the state House of Representatives, becoming the first woman in Georgia history to hold the title.
Jones’ rise to power could have big implications around the state Capitol, not to mention Fulton County, where she lives and which could be divided into two counties under legislation she advocates.

By week’s end, she was still trying to get settled in her role as well as her new Capitol office, just around the corner from House Speaker David Ralston (R-Blue Ridge). Her cellphone’s voice-mail box was jammed, and she was struggling to keep up with her e-mail. She suddenly had a lot of new friends.

“My kids laugh when they [reporters] say that,” she said of the reaction to her new title and its “most powerful”

This is Jones’ fourth term as a state lawmaker, her eighth year at the Capitol. She was majority whip before she was elected to her current job. Friends describe her as a reserved woman who doesn’t mince words. Just ask about her political role models.

“I mostly found them [politicians] to be irritating,” Jones said during an interview with The Atlanta Journal-Constitution at her Capitol office. “When I got involved in things in the community, I mostly found them to be in the way.What I did not appreciate is how complicated things are. I have come to appreciate that.”

Jones will probably come to appreciate those complications even more in her new role. She was immediately inundated with praise as she held the House gavel for the first time

But critics were already circling, warning of bitter legislative fights ahead if she advances legislation to carve Milton County out of northern Fulton County. Milton was absorbed into Fulton in the 1930s.

State Sen. Vincent Fort (D-Atlanta) fears Jones will use her newfound power to push a bill that could re-create the county. That House resolution has been lingering in the

“It’s a bad idea, and she’ll use her ascension as a platform to push it,”

But Jones also has her fans. They see her as a fresh, new beginning after the sex scandal that forced former Speaker Glenn Richardson from office.

State Rep. Joe Wilkinson (R-Sandy Springs) described the new speaker pro tem as a quiet woman not to be underestimated. She was a key player in the controversial creation of his city out of north Fulton County five years ago, Wilkinson said.

“She was the one who came up with the financial calculation to prove we, as the city of Sandy Springs, would be viable,”

Wilkinson said. “She would have won MVP in that fight.”
Wilkinson, who encouraged Jones to run in 2002 and sided with her in the Republican primary, said Jones is an understated politician who knows how to get things done.
“She’s not a back-slapper,” he said. “She is very reserved. She has a wonderful sense of humor. And it’s never humor at someone else’s expense. It’s usually directed at herself.”

Jones was born the middle of three children in Warner Robins, just south of Macon. Her father, Gerald Slaughter, was in the U.S. Air Force, and her mom, Mary, spent her days raising kids. The family moved a lot, living in California, Alaska and Labrador, but always seemed to end up back in Georgia.

"Dublin, Ga., [where her parents grew up] was always home base,”

Jones said. “We’d move around the country and the world, but we’d come back there for summers.”

Jones got interested in journalism while the family lived in California. She and a friend attended the trial of newspaper heiress Patty Hearst, arriving at the courthouse before dawn to line up for a seat.

“My mom always said that she always wanted her kids to come back to Georgia,”

Jones said. “When it was time to go to college, it was the only offer we had on the table.”
Jones got a journalism degree from the University of Georgia. She worked briefly for a small Georgia radio station but stayed in the news business “just long enough to realize I didn’t want to be that poor.”

She met her husband while he was at UGA and he was in law school there. They got married, and she went back to UGA to get a master's in business administration.

Jones and her husband lived in the Garden Hills neighborhood of Atlanta for 12 years, and have lived in what is now the Milton area for the past decade or so.

During that time, Jones has held sway in a variety of roles, marketing executive for Home Box Office, stay-at-home mom (for 10 years) and self-described “community activist.”

Jones got involved in community issues, both in Garden Hills and north Fulton, once trying to annex all of northwest Fulton into Alpharetta.

She said she never got interested in running for office until the 2000 census created three districts out of former Speaker Pro Tem Mark Burkhalter’s (R-Johns Creek) seat. It was Burkhalter, Jones said, who encouraged her to run for one of the open seats.

Burkhalter, she said, also gave her the advice that still guides her legislative career.

“He said, ‘Pick issues you care about. And pick something that matters to you.' "

For her, Jones said that means the creation of Milton County -- she thinks Fulton County is too big to be effectively governed -- and education.

The decision to run for office in 2002, she said, was made only after discussion with her husband and family. And it came after years of growing frustration from an activist working outside the system.

"I was tired of knocking on the door from the outside,”

she said. “I’d been doing that for 15 years. It was an opportunity to be on the inside and make a difference.”

Now she is very much on the inside. Republicans control the House, the state Senate and the governor’s office. She said the prospect of life under the microscope as a GOP leader doesn’t bother her.

“My husband and I are pretty low-key people,”

she said. “A big night for us is to go out on Saturday night to dinner and them come home and get in bed and read.”

Jones, however, can quickly become the politician. Just ask her if she sees her current job as a launchpad for higher office – governor, perhaps?

“I could just as easily see myself in four years running for something else as I could deciding I’ve had a great stint in public service and I’m ready to have a private life again,”

Jones said. “I don’t see either as more likely than the other.”
Posted by Accessmilton Admin at Wednesday, January 20, 2010