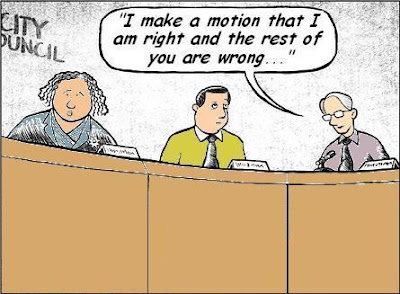 Alright, folks. Alot of you have been leaving comments that have not been the nicest regarding some of our current and past city council members.

For example, some want Mayor Lockwood for Governor
while others want him for breakfast.

With that in mind, we wanted to present you with your very own
"Perfect World" Milton City Council.

This is how it will work. Below you will see the council positions and those who have held each seat since incorporation. In the comments section below, your task is to fill these seats with who you think is the best choice.

You can use those who have held and/or are currently holding office or you can choose someone else who lives in our fair city. However, neither Michael Jackson or Luke Skywalker are options, if you catch my drift.

Tim, you can always take your ball and go home if you don't like the way we play, right.

President Obama's attempts to ram health- care reform through an increasingly reluctant Congress are starting to resemble a really eventful episode of "The Sopranos."

Whether or not you believe former Rep. Eric Massa's bizarre accusations of locker-room confrontations and conspiracies to drive him from office, there is no doubt that the Obama administration and its congressional allies are willing to use every trick in the book to get this bill passed.

They've already bought votes with pork and special deals -- the "Louisiana purchase" ($300 million to bolster that state's Medicaid program, which swayed Sen. Mary Landrieu); the "Cornhusker kickback" ($100 million to Medicaid there, sweetening the pot for Sen. Ben Nelson), and Florida's "Gator Aid" (a Medicare deal potentially worth $5 billion, a hefty price for Sen. Bill Nelson's vote). Plus the millions for Connecticut hospitals, Montana asbestos abatement and so on.

Nor were the Obamans willing to let a little thing like election laws stand in the way. They rewrote Massachusetts law to allow for an appointed senator to hold office for several months, hoping to get the bill through before the special election that Scott Brown ultimately won. Their plans spoiled, they even considered holding up Brown's seating to let the appointed senator continue to vote on health care -- until public outrage forced them to back down.

And, of course, there has been an unprecedented willingness to ignore congressional rules -- from the failure to appoint a "conference committee" to negotiate differences between the House and Senate bills, to their current plans to use the reconciliation process to bypass a Republican filibuster.

Expect the tactics to get even dirtier now.

Those who support the president can expect favors. No sooner had Rep Jim Matheson (D-Utah) suggested that he might be willing to switch his vote and support the latest version of ObamaCare than his brother was nominated for a federal judgeship.

Alan Mollohan (D-W.Va.) is also on the undecided list. And, purely by coincidence no doubt, the Justice Department just announced that it is dropping an FBI investigation that has been swirling about the congressman. Gosh, if only Charlie Rangel were one of the undecideds.

Those who oppose the president can expect the political equivalent of a horse head between their sheets.

Some of this is just traditional electioneering: On-the-fence Arkansas Sen. Blanche Lincoln is getting a primary challenger with some backing from the national Democratic machine.

But some of it is much nastier. Massa's story may have credibility issues, but other opponents of the bill are also starting to feel the heat. For instance, Rep. Bart Stupak (D-Mich.), whose opposition to abortion funding has become one of the bill's biggest hurdles, is now seeing attacks on his ethics.

MSNBC host Rachel Maddow recently questioned the legality of the low rent that a conservative Christian group charges Stupak for his DC apartment. She even noted ominously that disgraced South Carolina Gov. Mark Sanford stayed at the same building. The liberal blog Daily Kos has picked up on the charges and suggested that both the IRS and the House Ethics Committee investigate.

"Politics ain't beanbag," as Mr. Dooley noted. Presidents have always twisted arms and made deals. And when two-thirds of voters are opposed to your plans, you may have no choice but to play hardball.

But when Obama promised to change the way Washington does business, we didn't think he meant making it a "family" business.

Michael Tanner is a Cato In stitute senior fellow.

"I MOTION that we dismiss the case against my buddy...." [Lisa Cauley].

Airhead are great at parties, not so great at hearings!

Were you in her camp with Protect Milton?

Ok, first off the mayor needs to go, he could be the code enforcement inspector. We could flip a coin between Ragsdale who has done a "real fine" job at CPAC, and Skip Gray who will protect our pocket parks from the US Parks Dept.

If we cant get those 2 to step up, lets get Karen Thurman to be mayor. With her wonderful people skills and the ability to keep from raising her voice every fricking time she talks, plus with "JT" and others as her pupeteer then we will be in good hands.

How about Bill Lusk as mayor pro tem so he and KT can continue on with all there little meetings. Lets also move him to district 2 so he has more room for that cute little horse he has.

Next replace Burt with good old OB, which will take care of getting rid of Longoria as OB seems to have expanded his girth quite a bit so there wont be room for a district 5 councilmember.

With Karen and Bill in charge lets bring back Mark Scott as city attorney so there wont be anything going on "behind the scenes".

Next lets hire Julie Bailey as the community development director and hr director as she will feel right at home. We can replace her council seat with Gordon Hunter and be confident that you will get his cute little smiley face no matter what side you are on?

Then last but not least, hire Tim Enloe for City manager and all of our problems will be solved!

Will the City Manager be allowed to carry sidearms and drive police cars equipped with cameras?