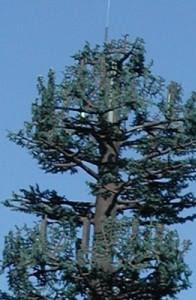 By Bob Strader
http://www.liveinalpharetta.com/
A Tree Grows in Milton

Actually three trees….and they are made of steel. Many of you may be aware of T-Mobile’s plans to locate three new cell towers in the city of Milton.

The locations and towers proposed are:

On January 13th there was an informational question and answer meeting held at Milton City Hall. There T-Mobile provided photos of the three locations with renderings of the towers in each photo. These renderings were made from balloon tests, to determine how visible each tower would be from various vantage points. Since that meeting there has been some uproar about how citizens of Milton can stop this from happening. Groups want city officials to deny T-Mobile and the property owners a permit to install the towers, pressuring them with future votes. They dispute T-Mobile’s business case that coverage is lacking or simply suggest that T-Mobile customers can just switch to a different carrier.

There are 2 main concerns that residents have with the cell towers, the first of which is that the towers will ruin the rural charm and pastoral views of our fledgling city. On a search of cell towers within a 4 mile radius of my community, a cell tower search site revealed that their are 26 tower locations. It surprised me that there are that many, I can think of 2 that I have seen. I guess they blend in or I just don’t pay attention to them. I know of one behind the Union restaurant on Providence Rd. that is made to look like a pine tree. It doesn’t look like a real tree, of course, but looks better than a silver metal pole.

The other concern some have are the unknown dangers of radiation from the antennas. A quick Google search will reveal websites that say there has not been enough research to be conclusive but we risk health effects ranging from reduced immune system competence and mood swings to brain tumors and leukemia. With over 4 billion cell phone users in the world and over 270 million cell phones in the US; dangers from an antenna a quarter of a mile away seem infinitesimal at best, especially when seemingly everyone in the world is running around with their phone pressed to the side of their heads. I don’t know of anyone planning to get rid of their cell phone, do you?

Don’t Tread on Me

The one issue that hasn’t seem to come up though is private property rights. The owners of the three sites have the right, as property owners, to: rent, sell, mortgage or develop their property - as long as it is within the constraints of zoning restrictions. Just like, thankfully, all Milton residents have the right to voice their concerns at the council meetings. We have a process and by-and-large it seems to work. My concern is that if the City Council votes to deny the permit simply because some people don’t like the towers, then the Milton City Council Members would be voting against private property rights . In my mind, that is theft. The property owner who had the rights to develop or profit from their land is now prevented from doing so, in spite of meeting the zoning laws that are in effect.

What comes next? Then any group of homeowners can get together to have that horse-farm get rid of their horses because the manure stinks. That small business owner that grows orchids on his agricultural land might have to cease and desist because his greenhouses aren’t ascetically pleasing to some. I’m sorry private property owner, but I don’t want you to sell your land to a developer to build more homes - I like the rural charm of your pastures. Oh, but don’t let your horse manure pile up or it will offend me. Never mind the fact that you were here years before my home was built and changed the rural view from your house.

Even though I think that we’ll all get used to the towers being there - just like we have with the hundreds of other towers that surround us, I agree that a cell tower is not an attractive addition to the landscape. We should be working to make the towers that do go in as unobtrusive as possible. If that means making it look like a tree, then we should be pushing T-Mobile to do that. But I hope we didn’t become the City of Milton so we can take away private property rights.

“The right of property is the guardian of every other right, and to deprive a people of this, is in fact to deprive them of their liberty.” Arthur Lee, “An Appeal to the Justice and Interests of the People of Great Britain, in the Present Dispute with America” (1775)

Many thanks to Bob for sharing his perspective with us. If you have some thoughts you would like to share on the cell tower topic, email us at sales@magnoliamedias.com / Subject line: Cell towers.

Makes sense to me.

Article should be required reading for all Milton Council members. Norvell & Cauley might want to read it.

I'm all for property rights, but as we all know just because you own property does not give you the right to do what ever you want. If your decision only affected you and no one else, do what you want to with your property. Unfortunately that is not the case. This does affect our property values in regards to resale. Not for tax purposes, cell towers really do not affect values when it come to tax valuation. It does however decrease the value of your home with resale and time on the market. I would never purchase a home near a cell tower. The studies are inconclusive as to the effects on humans. There are studies that conclude that clusters of certain cancers are associated with towers. This does affect the community as a whole. There are hundreds of studies out for both sides, the fact is we just don't know. I personally do not want my family exposed. If it doesn't matter to you fine...it matters to me.

Anonymous said...
This comment has been removed by a blog administrator.
5:29 PM

Strader4council said...
This comment has been removed by a blog administrator.
5:30 PM

Anonymous said...
This comment has been removed by a blog administrator.
5:35 PM

Bob, I hope John is going to give you a kick back on his cut of the profits generated at the expense of his neighbors. I know I would not want to be in his shoes with all the surrounding neighbors angered at his selfishness. The facts can be spun to favor either side your on but the major fact stands as this...no one wants the cell towers in this area no matter how you spin it. You need to take your tale to people who are not well informed in this area. That is the only way you will get someone to agree with you.The first blogger has it right. Give it up. There will be no cell tower in our area to decorate as a tree or profit one individual. Oh, and open your eyes as you drive through Milton and Alpharetta. The towers are very visible once you take the veil off.

Our watershed is contaminated with dangerously high levels of E. coli bacteria due to runoff from septic systems and horse pastures. Maybe we should we ban septic and horses in Milton?

I don't agree that no one wants the cell towers but that isn't the issue. The issue is; should a property owner be able to profit from the land they own if they adhere to the laws and code requirements, or should a group of people be able to dictate what that owner can do with their property just because they don't like it?

Hey, sewer pipes break and dump raw sewage into our water sources, too. No system is perfect.

Are Norvell and Cauley posting anonymously?

Property rights people!
You have no right to stomp on them.
Of course the majority complaining about the cell towers are those who live in subdivisions and were happy to give up their rights to a homeowners association.

This mindset is part of the problem with the country today.

That's okay, in a day or two the Federal Government is going to be telling you where to go, how to go, and how to wipe, and with how much toilet paper, one square, gotta cut back on spending after they bankrupt the country.

What's next? Are the subdivisions going to tell me how high to jump?

How is Bob making a profit at the expense of his neighbors?

1. From the word I here, he has owned the property for a lot longer than most of the subdivisions in the area.
2. Bob's farm wouldn't be worth what it is and taxed at such a high rate if the subdivisions hadnt' come in.
3. My neighbor in my subdivision says he is a nice guy and allows folks to come in and visit the animals for free.

Get off your high horse. I live in a subdivision and you are making us look like a bunch of winy brats.

I don't want him telling me what to do with my property so I am going to extend the same to him.

Then by all means put the tower in your yard and expose your family to who knows what. If this was going in next to you I bet you would be singing a different tune. It's easy for you to be on the side with T-Mobile, you, are not walking in my shoes.

Did any of the tower property owners try and stop your subdivision from comin' in?

If they did, you have a point, if they didn't then shaddup.

My SD was already there before the current owner bought his property. So he had a choice whether he wanted to move in next to a SD. The cell tower is being shoved down our throats!

NIMBYISM across the board.

Call names all you like. SD residents have rights to protect their investments just as all residents of Georgia.

If you don't like it, I hear Houston has no zoning regulations and is a veritable free-for-all. Maybe you'd be happier there.

SD residents pay taxes just like you. We have rights just like you. We can voice our opinion just like you. I also own property and land that is not associated with a SD. I still wouldn't want a tower within close proximity to my property. That's what's great about our country we all have opinions and can voice them. However, when one persons choices impact many in a negative way that's when it gets sticky, sorry.