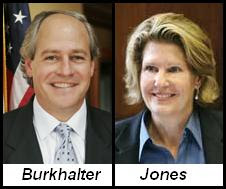 By Maggie Lee / Beacon Media
Two down, one to go. But the last hurdle is huge for the recreation of Milton County.
By a close voice vote, the plan for Milton County revival squeezed through the state House Rules committee and is en route to a Friday floor vote.
"It's essentially the net result of years of the mass exportation of services and tax dollars" from north Fulton county, said Rep. Mark Burkhalter (R-Alpharetta), explaining his support of the resolution. It would start the constitutional change that would enable Milton to secede from Fulton County. Rep. Tom Rice (R-Norcross), whose district covers part of north Fulton, said the resolution is long since due.
House Resolution 21 can't be substantially amended on the House floor, according to parliamentary procedure. But it must pass on Friday; that's "crossover day", the deadline for bills and resolution to make it through one chamber or the other.
If it passes the House and is heard and amended by the Senate, House leadership must agree to changes or the full house may try to amend the resolution. House Speaker Pro-Tem Jan Jones (R-Milton) has pledged not to bring the bill to the House floor unless she's sure it will be passed.
BURKHALTER ON OVERDRIVE
Sources say supporters are now just a hand full of votes short.
Burkhalter, who has taken the reigns as Jones' defacto floor leader and majority whip on the issue, is said to be working around the clock this week under the Dome to corral last minute support for the amendment. Jones's caucus leadership is divided on the issue, as her Majority Whip, Ed Lindsey (R-Buckhead), dubbed "Buckhead Ed" by this newspaper, is working against the initiative. If Jones and Burkhalter bring HR21 to floor, it means they have the votes they need --or are within one -- to win passage on Friday. They need 119 votes, now that Rep. Graves (R-Gainsville) has resigned from the house to run for Congress.
The legislative session will end ten working days after crossover day.
Posted by Accessmilton Admin at Thursday, March 25, 2010

It won't pass. You can take that to the bank. The entire concept is racist to the core.

If they tell Karen to jump, she will say "how high" and you can bet it will be in that shrill "chalkboard fingernail" pitched voice!

Whats with the Karen comment? All some of you pea heads know to do is sling the mud. You need to wake up and get real about this Milton County push. What will be the costs? If it comes to pass, then hide your wallet.

佳怡 said...
This comment has been removed by a blog administrator.
11:17 PM

It is not racist. Was it racist when they took Milton county to bail out Fulton in the first place? Give me a break people. Racism is a convenient excuse when no other option is reasonable to deny Milton from being resurrected. I am quite sick and tire of the race card. Again, we are subjected now to this treatment from our Federal government, where those who have less or don't know how, or don't have the drive to get up off their rearends and work for a living, feel entitled to other peoples money and hard labor. Let's let those in N. Fulton who work their butts off, pay for South Fulton forever!!! Nanny state period. People don't change unless they are forced into a situation where they have to. Time for Fulton to take care of themselves, cut the umbilical cord.

Obama understands this racist thing and he's going to put a stop to it. All you racist got to know that these people need help and you gonna help them whether you like it or not.

Back in the USSR!You don't know how lucky you are boy!

Now we will be named under Obama's Presidency, The United Socialist States of America.


USSA.
Now at the Olympics we will cheer our hockey team, USSA,USSA USSA USSA! Ridiculous!

佳怡 said...
This comment has been removed by a blog administrator.
9:21 AM

9:21am - Excellent point - forget Russian - we will all be speaking chinese soon!

You are full of it. Milton County was broke and asked to join Fulton in order to survive. Therefore the 1932 merger, along with Campbell County into Fulton County.

The merger was to save Milton & Campbell, not the other way around.

Don't let JJ and her cronies blow smoke up your @&&.

The County is too big.
Half the county funds the other, and the people who work in the County Gov. have a chip on their shoulder and treats the North like crap, eventhough they have no issue with reaping the rewards of the money collected from the North Fulton residents. Time to chop the county in half and stop allowing one group of people to pay for another.

Wikipedia:
The major reasoning behind the push for the secession from Fulton County and the recreation of the former Milton County is that Fulton County, in comparison to the state's other counties, is physically large. Its population is greater than that of each of the six smallest U.S. states. The new government could be more responsive to the needs of the proposed Milton County area. Even though northern Fulton County residents represent only 29% of the county's total population, they pay 42% of all property taxes.[6] A division of the county would ensure that tax revenues would be spent closer to where they are collected, but it would lead to the loss of $193 million in property taxes alone for the rest of Fulton County.[6]

The main opposition to the separation comes from the residents of south Fulton County, who say that the proposed separation is racially based. The county's white residents are quite separated by distance from the black residents. State Senator Vincent Fort, an Atlanta Democrat and a member of the Georgia Legislative Black Caucus, very strongly opposes the plan to split the county. "If it gets to the floor, there will be blood on the walls", Fort stated. "As much as you would like to think it's not racial, it's difficult to draw any other conclusion", he later added.[6]

A political firestorm broke out in Atlanta in 2006 when State Senator Sam Zamarripa (Democrat from Atlanta) suggested that the cities in North Fulton be allowed to secede and form Milton County in exchange for Atlanta and Fulton County consolidating their governments into a new "Atlanta County". South Fulton residents were strongly opposed to Fulton County's possible future separation.

North Fulton's economic strength, like many major American city suburbs, is due to the white flight of the late '60s and '70s. Milton County was originally annexed into Fulton County during the depression of the late 1920s and early 30s because it was economically unable to exist on its own. Now that times have changed and the new generation of wealthy north Fulton county residents have experienced economic and social growth, many want to be defined as separate from the perceived difficulties faced by south Fulton county residents today.

It's not about race. It's about money,period. The South has little, and the North has plenty. Why does half the county have to fund the other? I am fed up with people standing around for a handout or feeling entitled to other people's money, ENOUGH!
SPLIT THE COUNTY! Hurrah for Jones, go get em! We are behind your efforts 100%.

Where do you get that "we" stuff, paleface? You been around those smoke signals too long, haven't you.

"We" being, people who have a common sense and don't desire handouts from others, that's who "we" is.

I am not a paleface either, you assumed wrong.

7:03AM, Are you a Milton resident? If so how long have you resided here and where did you come from?

Pale face was a figure of speech...could not care less as to the color of your face.

Been here over 39 years, how about you? 2 generations.

You didn't say where you came from, did you?

Right. Sure you did. That narrows down your identity. Most people your age have trouble with today's technology, I'm impressed you blog so well gramps or granny.

Thanks for the compliment, however, I was only wanting to know where you lived before coming here. Some just have problems with answering direct questions.

Yes, I am 71 and lived in unincorporated north Fulton and city of Milton for past 59.

Wow! Nice topics, I am looking this type of topics. But I need more informations. I know a New Drafting CAD Site gives away over 100 House plans for free.
SDS PLAN