The Grapes of Wrath ... And Liquor Sales In Milton. 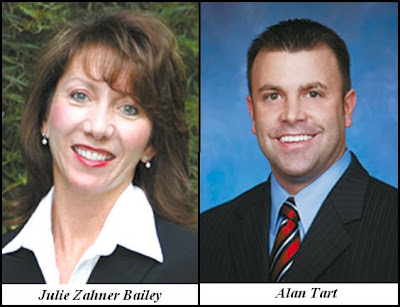 Tim Allen's ambitions for his Bottle Shoppe, "The Barn", dissipated as Mayor Joe Lockwood and Milton's City Council unanimously agreed to issue an alcoholic beverage license to "All About Spirits" owners Terry and Tana Coleman.
Unexpectedly, though, the March 1 decision left Allen and the council equally dismayed.
"After opening the store, within six months, we were getting hammered with requests for liquor," Allen told the council. Allen leased the Birmingham Highway space, which currently sells only beer and wine, three years ago. Armstrong Development, owner of the shopping center in which "The Barn" is located, faced stern zoning restrictions at the time of purchase -- restrictions that bar the sale of packaged liquor within city limits.
Allen told the council, "We sat down with staff and tried to figure out how we could make this happen: the amount of liquor we could have; how it would be packaged. We even set some self-restrictions with the hopes of being approved. And all were denied based on the city's current zoning restrictions."
The Colemans, owners of a service station across the street from "The Barn", plan to renovate, and add a package store as well. For reasons that are still unclear, they needed only comply with less restrictive 1950's zoning codes. Before proceeding, though, they applied for and received a license. Allen's repeated attempts to bargain with Milton's City Council, on the other hand, failed. On Monday night, he cited ongoing negotiations and unsuccessfully asked to have the Colemans' application denied.
TAKING IT TO THE BANK
Melissa Hastings, the Colemans' attorney, spoke of her clients' excitement over becoming part of the community. She argued, "There's only going to be distilled spirits. There won't be anything else in there. It won't compete with the gentleman across the street." Hastings further assured the council that "These people are ready to make these sales in the proper manner."

Council members Julie Zahner-Bailey and Alan Tart raised the motion to defer, at different intervals, with no seconds as the additional members sought clarification of the city's rights. Citing the law, City Attorney Ken Jarrard noted that any business meeting the requirements is entitled to the license. The Colemans qualified, and received it.

JUST COKE AND PEPSI: NO LIQOUR FOR YOU

The zoning confusion left the Colemans' parcel with no conditions attached, while forcing Allen to comply with newer and more cumbersome laws, putting them at a huge competitive disadvantage. Although the council opposed the sale of packaged liquor in Milton, they had no choice but to vote in Coleman's favor.

As a Milton ordinance forbids the issuance of a liquor license within 500 yards of an existing package store, Allen is out of luck. Outside city hall, he summed up his grievances: "I'm able to pay the bills. But I wanted more than that. I wanted what most business owners want -- to make money. There goes thirty percent of my projected business."

And another potential commercial taxpayer bites the Milton dust.

As you clearly noted in your message, the Council didn't have a choice but to issue the license to Coleman.

This is a sad story that really has its roots back to the negotiations for the retail center and the Birmingham Crossroads. In the BHA's haste to control the intersection, they created restrictions that have not allowed the businesses to thrive. The signage is extemely poor (can anyone name all of the businesses in the Publix outparcels), the layout uninviting and the Publix is just too small to draw an adequate customer base for themselves or the outparcel businesses to thrive. Maybe as designed but to the detriment to the small business people at the crossroads, the Publix has become more a quick stop shop for milk, beer and that night's dinner than a full service grocery store.

Mr. Allen put his financial future on the line in our community, but I cannot help but feel that he wasn't given the opportunity to succeed. Those of you who put your thumbs on this project and kept it there and now wonder why this man is out in the cold, you have no one else to blame but yourselves.

We cut off our nose to spite our face. Thus could have all worked out if only.....if only.....someone would have listened. As usual, they said NO without considering the future. Everyone should win when at the Crossroads.

Actually I take that back. Some of them listened and were willing to revisit the Birmingham overlay to encourage smart growth. The others were unwilling to budge just because.....at least that is how it appears.

Can we at least change that overlay so the crossroads can have signage?? That "rule" is the STUPID-est ever!!!!! Not a freaking billboard, how about a 2ft x 3ft wooden hand carved 14k gold lettering if you insist. Just figure that one out now before it's too late.

Work with the community, not against it. Or worse, do nothing because you fear that all hell will break loose by setting "precedent".

That talk got old about two years ago. We need new language and itty bitty signs for Birmingham Village.

This yet is another example of the poor decisions the Milton government makes on a daily basis. They spend all their time discouraging businesses to locate here. Who wants to put up with this cramp. Milton as a city is in deep doodoo. They need to take a long hard look at their shortfalls or there won't be a Milton. What a mess.

Once again, why aren't we part of Alpharetta?

Once again, because Alpharetta does not want us. Too many a## clowns here.

The overlay was designed to stop development not improve it.

It all starts and ends at the top with the mayor.