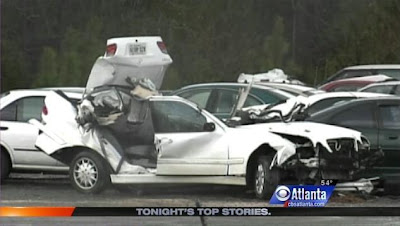 MILTON, Ga. -- A North Fulton community is reeling from the death of a father and son. The two were killed in a car accident.

Friends are remembering Bill Pope and his 11-year-old son who were killed in a car crash. The child's best friend, Jeffrey Schoendorf, survived.

Milton police said Pope was driving with the kids at 10:20 p.m. Saturday. They do not know why, but Pope lost control of his Mercedes on Birmingham Highway. He went across the road and hit two trees.

Rob Lafferty lives near the crash site and is a friend with Schoendorf family. He rode with the child in the ambulance. He said, "It's got to be hard for him. That's his best friend. To lose your best friend, that's hard."

Family friends said Schoendorf broke his wrist. Sunday night he was in good condition at Children's Healthcare of Atlanta at Scottish Rite. He is expected to be released on Monday.

The Popes live in Canton. They are prominent members of the Christian community in North Fulton County. Bill Pope was the Vice-Chairman of the Board for The Academy, a Christian School that closed its doors in January. He also ran his own consulting company called Pope Global Ventures.

Family friends say they are in shock and are standing-by to help the family. Bill Pope is survived by his wife and daughter who is in eighth grade.

Kimberly Sharpe knows both families and said, "Anytime you go through a tragedy like this with anyone who has such an impact on the community and family. It helps us all dig a little deeper and live each moment like it's your last because it could change in a second."

Schoendorf and the younger Pope were fifth grade classmates at the Fellowship Christian School in Roswell. The school says it will have grief counselors at the school on Monday.

To view a video segment on this story by CBS Atlanta, click here=>

Thanks for taking the time to discuss this, I feel strongly about it and love learning more on this topic. Auto Accident Lawyer Michigan