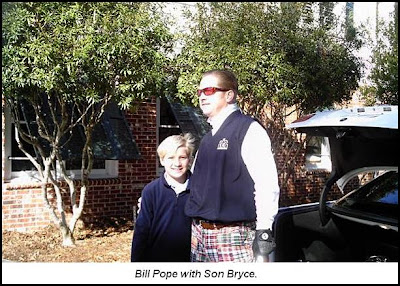 By Larry Hartstein
The Atlanta Journal-Constitution

The founder of a global consulting firm and his 11-year-old son were killed late Saturday night when their Mercedes sedan ran off the road and slammed into a tree, police said.

William Pope, 45, and his son Bryce were pronounced dead at the scene of the accident, in the 16000 block of Birmingham Highway in Milton, police said.

Another passenger, 11-year-old Jeffrey Schoendorf, was rushed to Children's Healthcare of Atlanta at Scottish Rite, where he was in good condition Sunday.

"We don't know why yet, but the driver lost control,"

A passerby reported the accident about 10:20 p.m. Police have no witnesses.

William Pope was the founder and managing partner of Pope Global Ventures, a Canton-based consulting firm specializing in sales, marketing and professional development. Pope graduated from Valdosta State University, where he was a member of the Sigma Alpha Epsilon fraternity, and completed the Kellogg Executive Management Program at Northwestern University.

The company Web site described Pope this way: "He maintains balance in his professional and personal life, ensuring that works gets done on time and that he has plenty of time to spend with his wife and two children, to go golfing and fishing, and to be active in his community."

Pope, originally from Thomaston, is survived by wife, Jane, and daughter, Madison.

The best person and father I have ever known. He will be missed beyond comprehension.