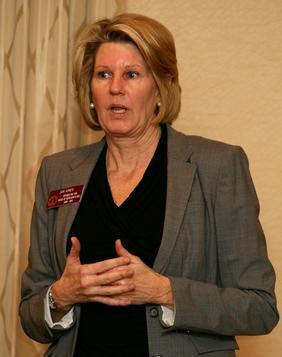 ALPHARETTA - Speaker Pro Tem Jan Jones, R-Milton, talked about state budget troubles and the formation of Milton County at the Greater North Fulton Chamber of Commerce Eggs & Enterprise breakfast this morning. The breakfast meeting helped kick off today's Business Expo, which is all about improving the bottom line.
More than 1,400 people had pre-registered for the Business Expo at the Marriott on Windward Parkway. Others were registering at the door.
The chamber committee lined up 19 separate seminars, all designed to help businesses make more money in trying economic times.
Jones told the chamber members and other Business Expo attendees that she expects to have enough votes by next week to pass a bill allowing voters to decide if they want to re-establish Milton County. A Constitutional amendment change still will be needed to move forward. She said she would not be too disappointed if it did not move to a vote in the House, as that would give Atlanta lawmakers time to work toward what she said would best help the city: consolidation of the remaining Fulton County into the city of Atlanta.
Gov. Sonny Perdue promised to veto any transportation bill that allows a county to opt out of the funding mechanism, something Jones said she supports.
Tansportation projects don't stop at county or city borders, so the funding shouldn't, either.
Fulton and DeKalb counties already are paying for transit with the MARTA sales tax. Jones doesn't want the transportation bill, which is intended as a short-term funding source, to include any maintenance and operation funding for MARTA. She said the transit agency shouldn't depend on this short-term funding for long-term, continuing expenses.
Higher education funding isn't quite as dire as people have been hearing, though Jones said there is a shortfall. Georgia's Board of Regents probably will raise tuition, something she could support if it is a moderate increase. The state's tuition and fees are near the bottom in costs, she said.
But an underlying problem for the state's tax system is that so many exemptions have been made. Georgians pay taxes on vehicles and mattresses, things they rarely purchase, and hold off on buying during economic downturns. But items such as groceries and medicine, which are purchased regularly, aren't taxed. Some of the exemptions are good ideas and help stimulate business, but nothing short of a tax code overhaul can solve the problem.
Jones said a task force will be formed to look at what a tax code would look like if built from scratch. That will be presented to the legislature for its ideas.
Posted by Accessmilton Admin at Saturday, March 20, 2010

In government when you don't know squat, you form a task force