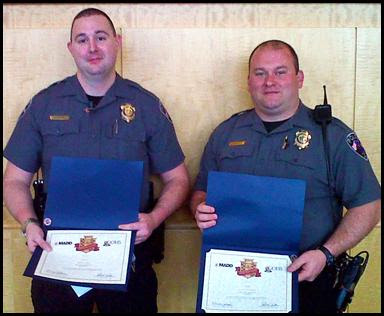 Media Contact:
Capt. Shawn McCarty
shawn.mccarty@cityofmiltonga.us
678-242-2570
MILTON, GA., March 30, 2010 - The advocacy group Mothers Against Drunk Driving (MADD) recently recognized two Milton police officers for their combined 85 DUI arrests in 2009.
Officers James Hickerson and Nathan Allen were among dozens of officers across the state recognized by MADD, which is dedicated to stopping drunk driving.
Hickerson received the group's "Silver Pin" for his 52 DUI arrests in 2009. He is one of only 96 officers in the state to receive this award, which is given to law enforcement professionals who make between 50 and 99 DUI arrests.
Allen received a "Bronze Pin" for his 33 DUI arrests. He was one of 223 officers state-wide who received the award for making between 25 and 49 DUI arrests.
MADD's Golden Shield Honor Award also memorialized Adam Stephens of Milton, who was killed in May 2009 in an alcohol related crash while on a city road.
Posted by Accessmilton Admin at Tuesday, March 30, 2010

Since no one has said it yet but I know they're thinking it ---Thank You!!!

And since we are on the subject of DUIs, who is drinking all that Bud Lite, seems to be our road's beer of choice. Look! There are remnants everywhere. Someone is going nuts and dropping a beer can every 20 feet all the way to the empty 20 pack and then all the way home?

Did they make it?

I don't want to see their garbage. It grosses me out.

I would also like to add my thanks. Officer Nathan Allen was the one who had to conduct the accident investigation on the recent tragic crash. He was out tonight on Birmingham Highway, running a speed check to try to get folks to slow down. I stopped to ask him to keep an eye out for my lost dog(now found, thanks to a good samaritan named Sherry!) and he couldn't have been any nicer or more professional.

I am right with you regarding the support of Officer Allen. Milton is lucky to have a hero of his caliber working hard to keep our families safe.

I am working on creating a city wide support group for our Milton Police Department. Would you be interested in being a part of it?

Also, if you are willing, I would love to get you on video relaying your support of our officers.

No pressure. Please let me know.

Officer Allen please discontinue police brutality. I still have anger towards you I don't think the way you handled the situation was professional nor respectful. If you don' know who this is then I think you should evaluate how you treat people.