D'Aversa guilty of ethics violation, no punishment given. 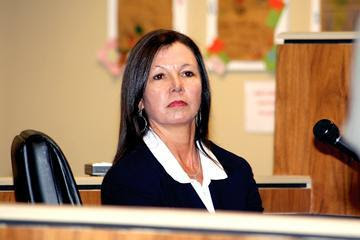 Former Milton Council member Tina D’Aversa took the stand at an ethics hearing to determine if she had committed any wrongdoing during the campaign. She was found to have broken two ethics rules but will receive no punishment.
by Jonathan Copsey / Appen Newspapers

Of the 16 possible ethics violations D’Aversa faced in the complaint, she was found to have violated only two – using government emails to conduct her campaign, and engaging in conduct unbecoming of a council member.

The board had the power to suggest that the city council give a warning or a reprimand, however, as was pointed out numerous times, since D’Aversa lost the election, there was little that could come of any action.

"I don’t feel that anything could possibly be done... in regard to this," said Board member Lisa Cauley.

"I feel that she has suffered from this already by losing the election," said Board member Kristen White. "A lot of damage has already come."

Board member Howard Drobes made the motion to make no recommendation of punishment. It passed 5-1, with only Chairman Clint Johnson opposed.

Who would have thought 25 words could create such a flap?

"My intention is for you to join a board or committee and to withdraw your application to seek my council position serving from District 5," emailed then-Council member Tina D’Aversa to her opponent in the election, Joe Longoria.

The email was part of a larger conversation between D’Aversa and Longoria in the months before the election, where they discussed his reasons for running against her. As Longoria testified at the hearing, it was not that he had any problem with her leadership in the city; in fact it was because he had tried to take an active role in the city by applying to various boards, only to be ignored. So he decided to run. He just happened to live in D’Aversa’s district and would have to face her.

In an effort to make a deal, D’Aversa offered him a position on a board (which is within her power) in exchange for him dropping out of the election. It should have been a win-win.

"I hoped that he did not run," admitted D’Aversa. "I wanted to keep my position."

The question then comes, was that a bribe?

For the most part, the board found that she did not have any intention to offer it as a bribe or quid pro quo, since she had copied the email to both Mayor Joe Lockwood and City Manager Chris Lagerbloom, who both testified that neither thought it was unethical when they had first read it. Longoria said that, while he thought the comment was "odd," he not only did not consider it bad enough to report, he continued to converse with D’Aversa.

In an echo of an earlier time, one where ethics charges were common in Milton, former council member Neal O’Brien took it upon himself to file the ethics complaint against D’Aversa. He did this after reports of the email exchange surfaced in local media, less than a month before the election. The strongly worded complaint alleges D’Aversa indeed had the intent to bribe Longoria, accusing her of 16 violations of the ethical code that she helped to write.

The ethics hearing began with O’Brien refusing to give testimony, which, through a procedural regulation, meant that his very complaint could not be used as evidence in the hearing, nor could he or his words. The hearing was then restricted solely to the emails sent back and forth between D’Aversa and Joe Longoria. Efforts by D’Aversa’s lawyer to paint the complaint as nothing more than politically motivated ended with Chairman Johnson repeatedly warning the layer to stick strictly to the emails.

Despite the complaint being inadmissible into consideration, the board’s general attitude toward it and the political nature in which it was brought was evident.

"The timing of it, the use of it, I have to say that I think that was unfair and I think that using the ethical board as a weapon or a ... tool during the campaign concerns me," said White.

"I made the decision that I thought it needed to be examined," said O’Brien after the hearing. "I felt strongly that it needed to be reviewed so that people could feel confidence in the city. To leave it on the table and to not address it would create an impression across the community that the city is crooked."

All one can say about the last paragraph is:

Be silent and risk being thought stupid rather than speak and remove all doubt.

In the beginning, bribes were illegal; now they are discouraged, except at election time (according to Kristin); let's recall Lockwood before it becomes mandatory.

Funny how few comments condemn the act or the perpetrator.

Lets recall him, I will stand up and take the job!

Milton will never win the City of Ethics award.

Neal has too much spare time, and suffers from illusions of grandeur.

Amazing how Kristin said at the end that the complaint and the Ethics Board was used as a political tool! Johnson didn't like that comment, too bad! It was the truth, too late in the hearing. Johnson would have none of it, because it implicated his buddy! Whad, she waited until Karen stepped out of the room to grow a pair!

Neil, you got lucky. The Board said she was guilty before you and Scott had to prove a thing!

Pays to have friends in low places.
Front row, middle. One Seat over to your right.