"Why Don't They Take The Bus?" 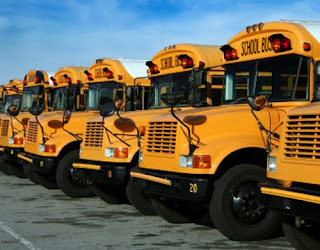 The answer to the redistricting traffic woes?

Various topics are always flying around Milton. If its not election talk it is development for and against this or that and everything in between. Lately, the redistricting topic has been on everyone's radar.

Much like you, I too have had conversation with numerous residents sharing their opinion on this issue. One of the biggest arguments has been the issue of traffic on the "rural" two lane roads. Some parents from Roswell whose children are being shifted to Milton High School even conducted an experiment and drove 50 cars through Crabapple during rush hour. Their goal was to prove how much extra time it would take to get their teens to class. By the way, one mother stated it would take an addition twenty minutes as opposed to their current time to Roswell High.

This past week, I spoke with a Milton resident who had chosen to take a back seat to all the hoopla. He did, however, ask the following question: "Why don't they take the bus?"

I paused for a moment and let the question sink in..."Why don't they take the bus?"
Standing back from the situation at hand and looking at the traffic issue from a purely objective stance, it is a good question to ask you, the taxpaying parents of Milton and Roswell.

Let it be stressed that I am neither an advocate for students to take or not take the bus.

However, if only school buses took the children to school, then traffic would indeed be far less. Hard to argue that point.

In conclusion, I present this basic question to you, the readers of Accessmilton.com. Do you drive your child to school or do you utilize taxpayer funded transportation? If you do drive them, then why? If you go the bus route, why?

Because you have a right to chose if you want to ride the bus or drive and the BOE 's poor planning shouldn't force anyone to have to take the bus as the solution. So the solution to the redistricting is take the bus? Then why doesnt all of metro Atlanta take Marta to work every single day, everyone, forced to do so to fix traffic on ga 400, i85, i75 and i285.

This is a free country currently.

I like to drive my kids to school in the morning and they take the bus home. I find the conversation time is priceless in the mornings...they are too tired to be on guard :-)

post 8:01, don't recall anyone stating it was mandatory to take the bus. simple, less cars on road, less traffic. this is your choice but don't complain about the traffic. same goes for marta, not mandatory.

You miss the point.

Suggesting a solution to traffic is to take the bus, instead of demanding real planners who know what they are doing, not just a degree in planning, and board members who have and actually use common sense and sensitivity to the children and parents in the communities they are voted in to represent is an absurdity.

Taking the bus does not take into account the times you are required to drive your child to school. Such as: early morning tutoring, before school clubs, mandatory practice (orchestra and band), test retakes, etc. Additionally, if your child rides to school during the "second load" they do not get picked up until 8:15 or thereafter.

Make the kids do their homework and take the bus.