Milton residents get chance to look, weigh in on plans. 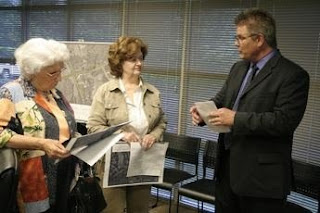 May 02, 2011
MILTON, Ga. - The city held an open house April 28 at City Hall to get residents' feedback on intersection improvements at Francis and Cogburn roads.

According to Andy Anderson, an engineer with Stantec, the firm managing the improvements, there are three options.

"We can leave the intersection the way it is - really don't do anything. Second, we can widen the road and add more lanes. Or we can put in a roundabout," Anderson said.

It was that last option that confused Hopewell Road resident Carolyn Pace and some other residents who attended the informal informational session. Some residents made clear their desire for road widening or traditional improvements to help traffic, however Anderson said the vast majority of feedback showed support for the roundabout.

The busy intersection was identified in the Milton Comprehensive Transportation Plan as a key improvement for the city.

Roundabouts are often used in place of traffic signals in Europe, however they are rare in the United States. The circular design is made in such a way to force traffic to slow down and make its way counter-clockwise around the circle to another side of the intersection.

The Georgia Department of Transportation has begun pushing for roundabouts more and more.

"There are more than 200 roundabouts in the planning phases in Georgia," said planner Randy Parker. "They reduce crashes and eliminate fatalities."
Because traffic is forced to move in one direction and at slow speeds, collisions are greatly reduced.

"If it works so well, why haven't you done this before now?" asked Pace, who was concerned about how people would drive the roundabout, especially if they did not know how to navigate it.

Currently, there are only two completed roundabouts in the state – one in Dawson County near the outlet malls on Ga. 400 and one in Gwinnett County.

"It will take some getting used to," Anderson admitted.

Residents may keep up-to-date with this and other Milton intersection projects at www.miltonintersectionprojects.com.
Posted by Accessmilton Admin at Thursday, May 05, 2011

A roundabout at that intersection full of buses and teenagers is the second dumbest thing the city could do!! Taking a bad dream and turning that intersection into a nightmare on elm street. Sounds so nice,, so novel.....huge mistake! Can't undo it once it's done!
stop the madness city hall!

What solution do you have to improve traffic flow? Clearly there are problems with that intersection. It should not remain the same.

You are correct, it should not remain the same. However, turning lanes and traffic signal would be a huge improvement.

Roundabouts are like household budgets, they work well on paper, but in reality............

widen it and add turn lanes and additional lights, in all directions, standard intersection improvement, forget about the roundabout, big mistake at the school intersection...

i agree with the first and third comments, sounds so nice, so quaint, so perfect, but in reality, Hopewell is so heavily traveled, adding a roundabout there will make things worse, it's not a matter of getting used to, just dont do it.

Or go ahead and have everyone criticize the city some more for another debacle. First the school in the wrong city, and now another huge mistake of a roundabout? doesn't anyone at city hall have any sense?