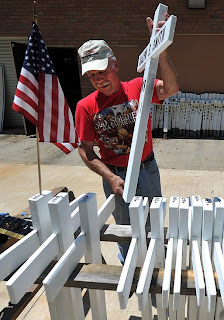 Milton resident and City Council member Bill Lusk places a freshly stenciled cross in a rack to dry Friday May 20, 2011. Lusk created the tradition of making crosses to honor deceased veterans four years ago with only a handful of crosses. This year 190 crosses are displayed along Deerfield Parkway in Milton.

Building on tradition is tough in a city too young to have one.

Enlarge photo Brant Sanderlin, bsanderlin@ajc.com Milton resident and City Council member Bill Lusk places a freshly stenciled cross in a rack to dry Friday May 20, 2011. Lusk created the tradition of making crosses to honor deceased veterans four years ago with only a handful of crosses. This year 190 crosses are displayed along Deerfield Parkway in Milton.

But at four years and counting, Bill Lusk has established a trend, if not an institution.

The Milton local businessman and City Council member spent May 22 doing what he has been doing since 2008, helping set handmade, white markers along the west side of Deerfield Parkway. Each cross-shaped marker, topped with an American flag, commemorates a deceased veteran with ties to Milton, from the Revolution to Afghanistan.

"Being a new city, we don't have any traditions," said Lusk, who served in Vietnam from 1965-67. "I'm trying to establish one."
Metro Atlanta is steeped in Memorial Day traditions, from the somber 63-year-old rite at Marietta National Cemetery to the state's largest gathering in Roswell, which began in 1997.

Milton, founded in 2006, is not too young to host its own Memorial Day Service, replete with dignitaries and uniformed veterans. But the names on the markers, Lusk said, provide a uniqueness to the city's observance.

Head south about four miles, then east another dozen, and you’ll see the inspiration.

Lining Pleasant Hill Road in Duluth are those same markers. The names are different and the flags on top are larger, but at 700 and growing, there are clearly enough of them to represent a tradition.

Duluth began its display in 1989, with city crews setting about a dozen markers. The small, wooden memorials now line almost a mile of Pleasant Hill Road, intersecting with another set stretching south onto Howell Ferry Road and north onto McClure Bridge Road. Others are set along Buford Highway and West Lawrenceville Street.

"If somebody imitates us, that's wonderful," said resident Alana Moss, adding that Duluth may have borrowed its idea as well. "I love it because we can't spread too much appreciation for military veterans."Lusk was struck with the Duluth design and set out to imitate it himself in his shop four years ago. He bought the materials, painted each marker and stenciled the names. That first year, Lusk and five volunteers set 58 markers. This year, 12 volunteers took about two hours to set just more than 200.

This was the first year for Frank Foster, a veteran from Rockdale County. "I think everybody should be out here doing it, whether they're a veteran or not."
Allen Calhoun, Lusk's business partner, volunteered from the start.

"I enjoy doing it," Calhoun said.

City Councilman Joe Longoria, who has volunteered the past two years, said he's proud to pitch in.

"I'm strictly here to support those for doing something many of us didn't have the chance to do," he said.

This year's featured speaker is Air Force Col. Murphy Neal Jones of Covington, La., who was a prisoner of war for nearly seven years in Vietnam.

The ceremony will conclude with a roll call of local veterans living and dead. Their friends and families will be invited to find and reflect upon the handmade markers along Deerfield Parkway.

The markers will remain up for the week. Then Lusk and others will collect them for storage until Veterans Day in November. By then, Lusk will have received more names and will build more markers to line the avenue.

"Somebody needs to do it," Lusk said. "It fell upon me."strong>

Thank you to the men and women who died to keep our country free. Pray we can keep it free!

Thank you all as I enjoy doing it.

I was driving along deerfield reflecting on all the crosses displayed and when I got to the end I realized I was driving about 10 MPH the whole way - there was a long line of cars behind me and not one of them beeped or yelled or gestured. A powerful monument for sure - it unified our city - even if for just a few minutes! Thanks Bill

You are welcome Karl. Please feel free to join us on Saturday to help remove them until next year.