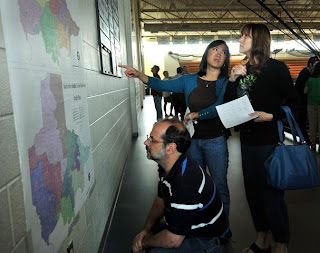 By Nancy Badertscher
The Atlanta Journal-Constitution

A small group of Roswell parents -- and their mayor -- made a final pitch Tuesday night to the Fulton County School Board to reconsider a proposed redistricting plan, one that would force 482 students who live in the city to shift to rival Milton High School.

"We need to strengthen the connection between towns and schools, not weaken it by saying schools don't matter in redistricting," Roswell Mayor Jere Wood told school board members during their regular monthly board meeting.

School attendance zones are being redrawn in north Fulton to fill a new school scheduled to open next year on Bethany Bend near the Forsyth County line, sparking changes for students in Milton, Alpharetta and Roswell, and thousands of emails, calls and petitions from parents.

At least 400 parents showed up at earlier hearings involving potential maps of the school districts. The latest map, which is being billed as the final one, has 234 Alpharetta High students and 1,347 Milton High students going to the new school, and 482 Roswell students attending Milton High, according to school system data.

The final plan is slated to be approved next month and will be effective for the school year that starts in August next year.

Roswell residents have been particularly vocal about wanting to preserve the strong ties that students feel to both their school and city. They also have complained that the redistricting plan will give some Roswell students longer and unsafe commutes that follow some of north Fulton's most congested roads.

"It took 32 minutes to go the 2.2 miles from our subdivision to Milton High School," she said.

Currently, students who live in her neighborhood can be at Roswell High and in their seats in 15 minutes, McKinley said.

Karen Kremer said the proposed redistricting plan will split up her son from students he's gone to school with since he was four.

She looked at the school system motto "Where students come first," and said she was "trying to figure out where my students come first."
In the Crabapple Lake and Crabapple Parc communities, homeowners were overwhelmingly opposed to the plan, which would move 30 students out of Roswell High, said Maryann Malena, a resident. She said those communities, built 16 years ago, have been heavily involved in Roswell activities for years and want to keep that connection.

"We watch the Roswell Fourth of July Fireworks from our yards, hear the marching band when the Roswell Hornets play at the Hornet's Nest, and look across the street to the Roswell High School cross country team training at Sweet Apple Park," Malena said.

Posted by Accessmilton Admin at Wednesday, May 11, 2011

Anybody read what Neal Boortz had to say on redistricting in the AJC on 5-14-11?