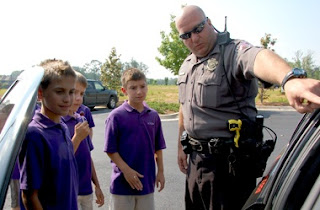 Kings Ridge Christian School (KRCS) fourth grader Marc Gorski had an unusual request upon winning a raffle during a school fundraiser, one not a lot of youngsters would make: He wanted to party with the police.

Gorski, a student of KRCS reading specialist Karin Mulvey, initially won the teacher’s donated raffle themed for a “tea party.” Given that wasn’t his cup of tea, Mulvey said he could choose any party anywhere. So he requested her husband, Milton Police Officer Scott Mulvey, who speaks to her students regularly about staying safe and on the right side of the law, host him and his friends at Scoops ice cream parlor in Crabapple. He also wanted officer Brian Kiel and his K-9 partner, DaSilva, to come, as well. Apparently the pair had made quite an impression during a visit to the school earlier in the year.

“You’d think they would want to go play paintball or video games,” said officer Mulvey. “But they wanted to talk to officers Mulvey and Kiel.”
So on Tuesday, May 10, Mulvey and Kiel hosted five 11-year-olds at the popular Crabapple business. Scoops donated a party room and let the boys get their fill of ice cream.

“They were so excited,” said Dawn Gorski, who placed the winning bid at her son’s insistence. “It was all they talked about all week.”
After a question and answer session ranging in topics from the officer’s weirdest cases, to the youngest person they ever arrested, to whether they’d ever been involved in shootings, bank heists or fights, the boys got to tour a police car and see a demonstration from DaSilva.

So was it worth it for the young Gorski?

“It was really cool,” he said.

Many thanks to Milton Officers Mulvey and Kiel for putting their lives on the line for Milton families and their property. You truly are heroes!

See below for pictures from the party. 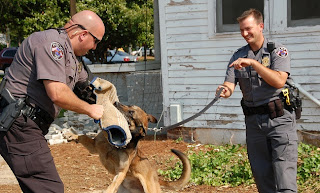 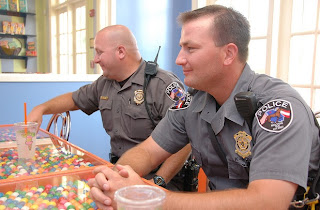 Officers Kiel and Mulvey listen intently as another question comes their way. 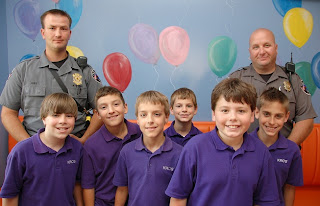 A perfect photo to end a perfect day.
Posted by Accessmilton Admin at Monday, May 16, 2011