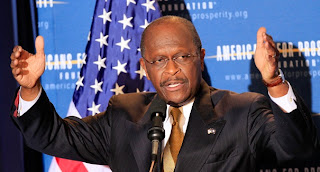 Herman Cain on Friday evening all but declared that he will formally enter the presidential race later this month.

"Save the date, May 21, Atlanta Olympic Centennial Park at high noon," Cain told conservative RedState blogger Erick Erickson on his Atlanta-based radio show. "We will be holding a major announcement event from me."
"All I'm going to say is this," Cain added, "Do you think I'm going to be making a big deal out of this to announce that I'm not going to run?"
The Atlanta businessman and radio host shared the stage with four of his likely rivals Thursday night at the first Republican presidential primary debate in South Carolina. He is now in Las Vegas for a tea party rally.

Cain is already scheduled to be in Iowa on May 20, where he'll speak to Council Bluffs Republicans.

Cain will also speak at the Faith and Freedom Coalition's conference in Washington D.C., in early June. The confab of cultural conservatives will feature a host of potential 2012 hopefuls, including Rick Santorum, Donald Trump and Michele Bachmann.
Posted by Accessmilton Admin at Tuesday, May 17, 2011