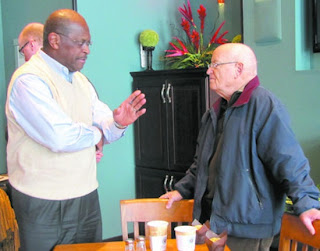 Georgia business leader and presidential hopeful Herman Cain speaks with Le Mars resident Gordon Greene after a meet-and-greet gathering Wednesday at Habitué. Cain spent a few hours in Le Mars Wednesday visiting with voters about what he would do as the nation's leader.

People eyeing the nation's highest office for 2012 are planning and making stops in Plymouth County.

Wednesday, Herman Cain, a Georgia businessman and radio host, spent about two hours with about a dozen people at the Habitué coffee shop in downtown Le Mars, speaking about what he'd do as U.S. president.

Cain, whose resumé includes bringing Godfather's Pizza out of near bankruptcy as its CEO, shared how his business experience would shape his presidency.

Audience member Darin Raymond asked what Cain did as a business leader to move companies forward when they were stalled.

"The first thing I did when I went into each one of these situations that was stuck in a certain culture that was holding it back was I fired somebody," Cain said. "It lets them know things are going to be different."

He said when he worked at Godfather's Pizza, he once asked all the vice presidents to cut their budgets by about 15 percent because the company was going bankrupt. One vice president told Cain he couldn't run his department on 15 percent less.

"So I redirected his career," Cain said, bringing a laugh from the crowd. "I hired somebody that could, and she did."

He cited a recent report listing where government programs overlap.

"When is somebody going to do something with the information?" Cain asked.

As CEO, a person has to take a very active role in the kind of changes they want to make during his or her first several months with a company, he said.

"As president, I wouldn't appoint some agency heads and leave it just up to them," Cain said. "I would have to actually be a part of that process initially. That's how you change the culture."

He has a five-pronged plan to boost America's economy.

First, he would lower the top corporate tax rate from 35 percent to 25 percent.

Second, he would make the tax rates permanent.

Fourth, he would tax 0 percent on repatriated profits -- profits made in a business or investment in a foreign country then brought back to the U.S.

Fifth, he would make a one-year payroll tax holiday of 6.2 percent for both employees and employers.

"I will guarantee that if we did all of those in one bill and put that into law, our economy would grow at least twice the rate it is now," he said.

In addition, Cain is in favor of what has been called a "Fair Tax." Under this kind of tax, federal income tax would be eliminated and instead a consumption-based tax would be imposed. That means people would pay less income tax, but pay higher sales tax on goods and services.

Steve DeRocher, of Le Mars, who attended the meet-and-greet Wednesday, said he became interested in Cain after reading about him online and had been in touch with him before his stop in Le Mars.

"I like his conservative values and business background," DeRocher said. "He's taken worse-case scenarios and made them into lemonade. He's got great people skills -- he has everything a leader needs."

DeRocher said he liked Cain's ideas about the nation's deficit and health care.

"He's got the ability to tackle those big issues," DeRocher said.

The Le Mars man said he was even more enthused about Cain looking into a presidential run after hearing him talk in person.

"And as I visit with people, they are saying they are very interested in him, too," he said.

Cain said he would be back to Plymouth County down the road. He wants to meet as many voters as it takes to pit him against President Barack Obama in the next presidential race.

"I welcome the chance to run against him toe to toe," Cain said.

Have been following accounts about Herman Cain. He definitely has my vote. He is a good man.