If You See A Milton Officer, Thank Them. 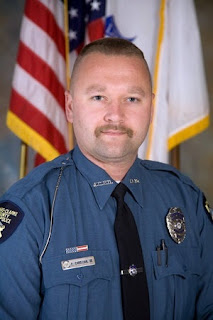 The Athens police officer shot to death Tuesday has been identified as Senior Police Officer Elmer “Buddy” Christian, a father of two.

NOTE: On behalf of Accessmilton.com, our thoughts go out to the family and friends of the slain officer above. Every day, police across the country put their lives on the line for those they serve. If you see a Milton Officer out and about, please thank them for looking out for the citizens of Milton.

ATHENS, Ga. — Thousands of people mourned a slain Georgia police officer whose killing led to a days-long manhunt for a suspect who surrendered live television.

Hundreds more lined the streets as a horse-drawn hearse took his body to Evergreen Memorial Park for burial. One of Christian's hobbies was shoeing horses for friends and family.

Hood had been holed up with nine hostages at an Athens apartment. Five exited the apartment along with him. Hours earlier he had released four others.

Randy Crowe, pastor of Hull Baptist Church, where Christian was a member, cautioned relatives, friends and co-workers against letting anger consume them.

"Does (Hood) know the devastation he caused?" Crowe asked. "Does he know what he has taken away from this family, from his friends here today and from his comrades?"

As Hood was being taken into custody late Friday, he told WXIA-TV in a brief videotaped interview, "I regret killing that officer."

When asked what he meant, a handcuffed Hood said, "That officer. That innocent officer. I regret that ..." Asked for more details, Hood said, "You know, they killed my brother. They were going to kill me."

Hood was sentenced to 12 years in prison in 1997 for armed robbery and released in 2009. In 2001, while Hood was serving time, his 22-year-old brother Timothy Hood was shot and killed by an Athens police officer. Investigators said at the time that Timothy Hood pulled a gun on an officer and was shot when the weapon jammed.

Christian, who was 34, leaves behind Melissa, his wife of 15 years, and two children — 2-year-old Wyatt and 5-year-old Callie.

Christian started out as a beat officer and then moved to traffic enforcement, said police Chief Jack Lumpkin.

Athens-Clarke County has established a memorial fund at Athens First Bank & Trust and Lumpkin assured Christian's wife and children they would not be forgotten.

"The Athens-Clarke County Police Department will be there for you over the long haul," he said.

Police said Hood lured Brooks to his parents' home Tuesday telling him he wanted to "show him something." Brooks arrived at the home to find Hood and four masked gunmen inside, police said.

The men bound Brooks' feet and hands and Hood asked him for addresses of people Brooks knew and threatened to kill him, police told the newspaper. The men may have wanted information linked to Wray's slaying, which police think was drug-related, police said.

The men forced Brooks into the trunk of a car and drove off, police said. Brooks freed his hands, popped the trunk and escaped when the car stopped at a red light, police said.

Police issued an alert for Hood and Howard spotted Hood's brother driving an SUV and pulled him over. Jamie Hood got out and shot Howard, police said.

Christian, who was in the area on an unrelated call, stopped to assist a third officer who had Matthew Hood in custody. Hood ran up to Christian's car and shot him through the window and then shot Howard a second time, police said. Howard remains hospitalized but is expected to recover.

Hood then fled on foot, carjacked a car and disappeared, police said, sparking a massive manhunt that came to its end late Friday evening after a seven-hour standoff.

Hood was arrested and charged with murder and 13 other felonies. Police say more charges are likely.