A message about recent residential burglaries. 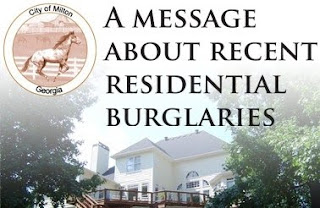 Hello residents of the City of Milton. This message will try and clear up some misinformation that has been spread in local blogs and e-mail chains regarding recent burglaries in the city.

We have had no home invasions, nor have we had any robberies. Both of those terms imply a crime against a person occurred. What we have had is residential burglaries. Burglary is a crime against property. It is a serious crime; however, we don’t want to cause panic in the community by implying crimes are happening against people when they are not.

Since Jan. 1, 2011, we have had 18 residential burglaries. In this same time period in 2010, there was exactly the same amount – this information is available should you wish to inspect it. It appears the difference is a local blog posting the initial incident reports of these crimes. That is not the problem – police reports are public record and available at City Hall for everyone to see by state law. However, there is no historical context given to these postings – so it appears as though a sudden crime wave is occurring which before did not exist. That is simply not the case.

The Milton Police Department has evaluated each of these burglaries, trended them on pin maps, looked for similarities in how the crimes were committed and there is little similarity between them in total. A couple of them – maybe; but generally, there isn’t anything obvious that jumps out.

Some of you might have received the press release we created yesterday about ways to decrease chances of burglary. This release was ready to go early in the week, but new information that was coming together as recently as yesterday afternoon and even right now as I am typing has some impact on what we were able to release.

Hopefully soon you will see resolution to at least a few of these crimes. A police investigation is ongoing. Beyond that, we are not in a position to release specifics of how or where that investigation is leading.

If you want to stay up to the minute and current with the crime reports around Milton, you can always take a look at Crime Reports on the city’s Web site, available here: http://www.crimereports.com. This site is hooked directly into the Alpharetta police and fire dispatch center, C3. It shows reported crimes and sex offenders, 24 hours a day, 7 days a week. You can look at a map of Milton and see what is happening. All you have to do is search zip code 30004 (or your own address) and then you can move the map around and see what is going on. There is even an iPhone app for that if you want to stay connected anywhere.

In addition, if you would like to sign up for the city’s newsletter and e-mail distribution list so that you receive up-to-the minute updates, just put your e-mail address into the box on the top right of the home page. You will be added.

If you would like to give us a call or just chat over e-mail, please contact Jason Wright, Communications Manager at 678-242-2523 or jason.wright@cityofmiltonga.us.

Thank you very much for your time.

Access Milton: how do you determine who gets credit for City of Milton press releases and other announcements? Mostly, we notice you are copying and posting articles as your own when in fact they were published by another media outlet.

Poor Jason - he is now attempting to cover his tracts as usual. He has not informed us in a timely manner of serious crimes. All he is doing is condemning accessmilton for the information given to the community.
Thank you accessmilton for keeping Milton citizens informed.

No worries Milton, "it's the same amount of burglaries as previous year." Sleep soundly knowing all 3 officers are all over it.

That had to be the stupidest comment I've read from the city of milton, and thats saying alot. Who wrote that nonsense???

Jason's baah..aack from maternity leave! 8:58 Does he blog on Tim's website during city hours? Can we check his computer? He's too smart, probably uses his phone.

Anyhoo, I disagree, the maternity leave had to be the most unprofessional thing I've ever read first, the crime comment takes second place, but a close second.

That's the point, comment 4:53am,
big boy Jason is NOT doing his job, and crying when someone else is working. He needs to be replaced with someone that Milton can trust.

Yahoo comment 5:43am, hey BIG BOY, you really have a nasty mouth.
Speaks well about the judgement of city hall. Let him go and hire someone that has a high degree of integrity and a tad of ethics. This Boy failed doing his job.