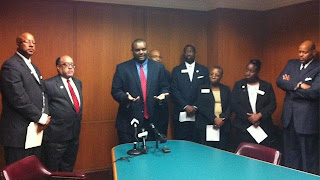 ATLANTA -- A group of African-American lawmakers has filed a federal lawsuit seeking to dissolve the cities of Sandy Springs, Milton, Johns Creek, Dunwoody and Chattahoochee Hills in Fulton County.

They argue that lawmakers in those areas circumvented the process to get bills passed to create those cities without input from the Fulton and DeKalb delegations. They also argue the vote of minorities in those communities has been diluted.

The group told Channel 2’s Mike Petchenik the lawsuit is one way to prevent the formation of Milton County. “What you have is predominantly African-American delegations in both Fulton and DeKalb counties being circumvented by the Republican Legislature," said state Sen. Vincent Fort.

“As the movement to create a County of Milton moves forward, it’s absolutely critical that this lawsuit be in place at this time,” said Fort. State Rep. Wendell Willard, who was instrumental in Sandy Springs' charter, told Petchenik the lawsuit has no merit and that lawmakers followed the rules, even getting approval from the U.S. Justice Department, before forming the cities.

“When the charters were passed, one of the requirements we met was to have the preclearance of the bills by the Justice Department, and all of them were in fact cleared,” Willard said.

“Formation of the cities dealt with allowing the people in those areas a right to have some local control and say-so about services delivered to them, just Senator Vincent Fort sees the city of Atlanta as the local government to provide his services,” Willard added.
Posted by Accessmilton Admin at Monday, March 28, 2011

Hope the people in Brookhaven are successful.