Mayors deliver meals to the elderly. 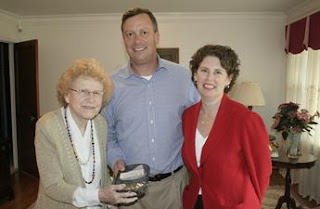 MILTON, Ga. – For many older Americans, the Meals on Wheels program and the volunteers who bring those meals are the only regular contact they have on any given day.

That is one of the reasons Senior Services North Fulton, a Meals on Wheels Association of America member, and the mayors from the cities of Roswell, Alpharetta, Milton, Johns Creek, Sandy Springs and Mountain Park participated in the national Mayors for Meals on Wednesday, March 23.

These mayors delivered meals and visited with senior residents in their respective communities to help support and raise awareness of the importance of senior nutrition.

Senior Services North Fulton is a community-supported, nonprofit organization helping senior citizens live independently and have a richer, fuller life. Senior Services Executive Director Carrie Bellware said senior citizens are living longer, but their families are often dispersed, their income is limited and their health is sometimes medically fragile. With all of this, they find it hard to continue to live independent lives.

"That is where Senior Services can help," she said. "One of the primary ways our organization does that is through the Meals on Wheels Program and the 450 volunteers in North Fulton who make it work."

Heidi Sowder, volunteer manager at Senior Services, said Meals on Wheels delivers meals to 230 clients on 16 routes. Last year, they delivered more than 48,000 nutritious meals. The program is funded by the Fulton County Office on Aging and Senior Services on fundraising.

"Malnutrition is a big problem in the senior population," Sowder said. "Many no longer have the strength to cook good meals. It may be they can't open cans or peel potatoes anymore because of arthritis or see to set the oven temperature."

Many need special diets due to diabetes, high blood pressure or other ailments that make it difficult to prepare the right meals. Meals on Wheels brings food that is prepared locally and quick-frozen that the seniors can heat in the microwave. "This is a big part of how seniors can remain in their own home for as long as possible," Sowder said. And there are social benefits for the seniors as well. "Many times, volunteers bringing a meal are the only person a senior may see or talk to that day," Sowder said. "It's a way to know they are doing all right." In addition, care managers make calls on the seniors. They and the volunteers are trained to notice for signs that some intervention may be needed – they may seem disoriented or their living space is getting messy. "Anything out of the ordinary," she said. "It is hard to lose one's independence, and that is why the program is so important to many of the seniors. They want to stay in their own home."

Volunteers work a flexible schedule and can deliver as little as once or twice a month. Yet many volunteers seem to enjoy it as much as the seniors, Sowder said.

Wright was born and raised in what is now Milton, and has lived in the same home for more than 40 years, watching Milton change from fields and pastures to what it is now. "There was no money back then," Wright said of farming in North Fulton. She remembers local women fighting over empty sacks of chicken feed, because of fabric shortages during World War II. "It was a hard life. We worked hard every day," she said. "And if you were down on your luck, people would help you out.People today don't know what it was like," Wright added.

Wright's mother died of pneumonia when she was born, so she was raised by her father, who lived in rooms above the Hopewell Baptist Church, as well as by aunts and uncles. Her first husband was a farmer, and she remembers falling in love with him at first sight. "I said, 'when I grow up, I'm going to marry that man,'" Wright recalled saying at age 11. When she was 16, she finally did. He was 22 at the time. "I just fell in love with him."

At 91, Wright is small and fragile, and gets help from her grown son and extended family. She has one great-grandson. Everyday, she gets a meal from Senior Services North Fulton and their Meals on Wheels program. "It's the best thing that's ever happened to me," she said of the food.